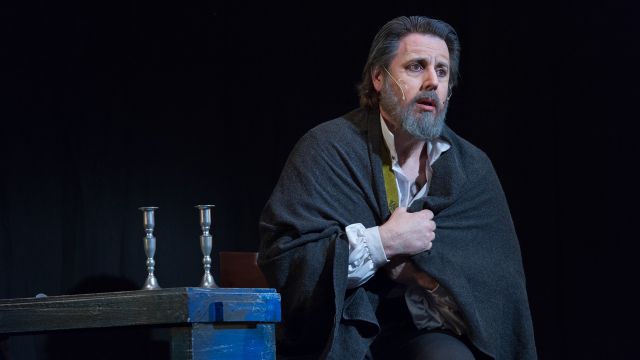 Set in 19th century France, Les Misérables is based on the novel of the same name by French poet and novelist Victor Hugo. Transformed in 1980 into the musical we know today, with music by Claude-Michel Schonberg and English lyrics by Herbert Kreuzer, it has been on a stage somewhere in the world ever since.

Tragic protagonist Jean Valjean, ‘prisoner 24601’, is released on parole after serving 19 years hard labour for stealing a loaf of bread. Policeman Javert makes it his life’s mission to re-capture him after he breaks his parole. After being shown kindness in the form of forgiveness, Valjean vows to redeem his sins. What follows is a tale of love, hope, faith and the tragedy of war in revolutionary France.

The latest offering of this epic production has been produced by the G & S Society of South Australia with the passion and commitment needed for this 3-hour tale to be successful. It is by no means a happy story, but instead offers up hope and highlights compassion in a time when the world was imploding. A war between classes still holds its relevance today and the heart-breaking social commentary offered up makes you wonder whether we have learned anything from the past.

Directors David Sinclair and Linda Williams have gathered together a stellar cast that evoke the right amount of emotion from a very attentive audience. Every word sung drips with a stirring sentiment. It quite literally leaves you spellbound in your seat.

Musical director Peter Johns does a fine job of steering the musicians with a score that is simply first-class. From the stirring first chords it is clear we are in for treat.

Every area of production has been carefully thought through and it carries with it a creative and emotional impact. I was captivated by scenery projected onto tall flats, while a rotating barricade produces one of the most powerful tableaus I have ever witnessed; the bodies of youthful men, women and children motionless in death was truly poignant.

Adversaries Jean Valjean and Javert are played by Mark Oates and Andrew Crispe respectively. Both offer performances of a professional nature; with ripe voices that project throughout the theatre. Their pairing is one of the finest casting choices I have had the privilege of watching. Tragic and layered performances by Casmira Hambledon as Fantine and Jennifer Trijo as Eponine provide us with two heart-breaking vocal performances of “I Dreamed a Dream” and “On my Own”.

Innkeepers Thenardier and Madame Thenardier, brought to life by Kent Green and Vanessa Lee Shirley, offer up a splash of comedy, with outrageous results.

Supported by a rousing ensemble full of energy and empathy, the performances ensure one becomes invested in the tragic outcome.

As this tightly-oiled machine came to a close on the night I attended, an appreciative audience rose to their feet. The Gilbert and Sullivan Society have a theatrical gem on their hands and I was privileged to have a seat at this sold-out season.