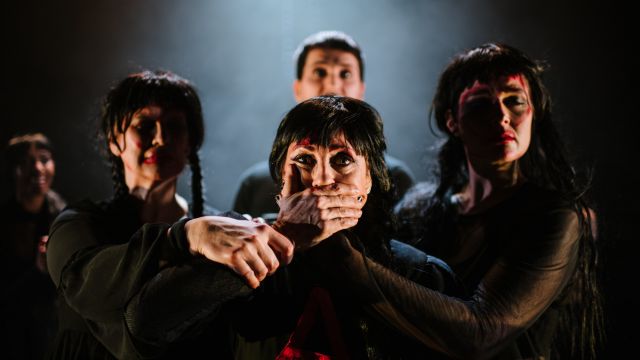 Let Men Tremble is ‘inspired by’ Nathaniel Hawthorne’s 1850 novel, The Scarlet Letter, the story of Hester Prynne in 17th century Salem.  She has a child out of wedlock, refuses to identify her lover, and is punished with imprisonment, humiliation and by being forced to wear the letter ‘A’ (for ‘Adulterer’) on her breast for the rest of her life.

This production maintains a rather tangential connection to the novel, but it is visually impressive, almost overwhelming, with scaffolding, platforms and stairs, dominated by a huge Christian cross picked out in lights.  The whole effect is greatly enhanced by Ben Hughes’ atmospheric lighting and William Cooper’s insidious or disturbing music.  The many costume changes are dominated by striking brilliant reds and deep blacks, broken occasionally by the vulnerabilities of bare flesh.  But what of the text and burden of the show?

It does more or less follow the plot of Hawthorne’s novel – in so far as this show has a plot.  (No writer per se is credited.)  Instead, the bare bones and characters of the novel are brought into the present and the transposition provides insights of which Hawthorne was certainly – but unforgivably, apparently - unaware.  For instance, the clergy are now Catholic rather than Protestant (the Church of Rome being the most obvious contemporary target), and later some authority figures are pointedly played by women pretending to be men.  The show begins with something like an energetic Zumba jazz ballet routine (or meat market) in which three male figures (Chris Beckey, Danny Carroll and Leo Thompson) with clipboards roam about inspecting – that is, objectifying - the women’s bodies.  They segue – fittingly – into soutane-clad priests while the women (Jane Cameron, Caroline Dunphy, Eidann Glover, Nicole Harvey, Alexandra Hines, Shamita Sivabalan and Louise Woodward) take on a variety of roles – including, of course, Hester Prynne herself, plus the condemnatory women of Salem, a ‘chorus’ on the action and various other figures ranging from abused and angry women to clichés of glamour and ‘sexy’. It’s clear that there is a great deal of talent in this ensemble, but I confess that there were passages where I was not entirely sure what was going on because stretches of the text are chanted by the company in unison, and there are obscure allusions, metaphors and symbols in the action which eluded me.  But that, no doubt, is my lack.  Yes, there is, as the show’s press release (by director Steven Mitchell Wright) says, ‘song, dance and theatrical madness’, but is it ‘a rebellion… a revolt… a battle cry against the patriarchy, the church and theatre itself’?

Yes, the church, particularly the Catholic Church, cops it: it is now a well-defined sitting duck despite its crimes and decreasing power.  The Theatre?  As delineated here, the theatre is entirely dominated and controlled by men and their ideology – and always has been.  There is a dramatised protest against that: Chris Beckey refuses to play the masculinist part assigned to them.  But like so much here, their ponderous protest and their walk-out leaves nothing so much behind as a hole.  Yes, we say, and…?

The real target and substance of the show’s rebellion is the patriarchy of which the Church and male-dominated art of all kinds are a part.  But the way the show rebels is to rant – and rant - against these things, to list angrily the oppressions, the objectification, the insults, the violence, the misogyny.  Of course, likely audiences for this particular show know all this; they have heard it all before – and maybe that is affirming.  What’s missing is some investigation – or some genuine challenge - let alone dramatization of why the world is like this and what we might do about it.  (It is not difficult to think of a number of contemporary theatre pieces that do this, such as, even in this same Theatre Works space, a fine adaptation of a 19th century (!) novel, The Mill on the Floss.) Towards the end of its 100+ minutes, Let Men Tremble makes reference to women’s stories, stories that have been supressed and cry out to be told (as if there are none now and never have been) and at that point I wonder if I was alone in thinking, ‘Okay, tell us one of these new stories - instead of this rather obvious, over insistent rant.’  But no.  I also wondered why this feminist show is designed and directed by a man.  If one takes the text seriously, that is simply unacceptable.  Isn’t it?  Things hit a nadir when the cast chants a long list of murdered women – real names and unnamed victims.  Is this exploitative?  It’s certainly easy.

The press release claims that Let Men Tremble will ‘polarise and challenge’.  Well, for all its ingenuity, visual impact and passion (not to mention a certain self-righteous smugness), I doubt it.  Or perhaps it will polarise.  There are those who’ll enjoy hearing spoken and sung statements of already frequently stated grievances, and they will be divided from those who rather restlessly watch this show in the hope that The Danger Ensemble might have come up with something of greater originality, depth and clarity.