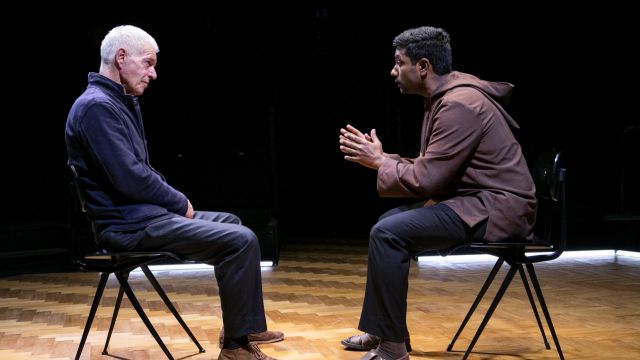 Tom Wright’s adaptation thrusts Brecht’s portrait of this towering if flawed hero of science into a modern world of besuited bureaucrats and miked-up security guards.

The churchmen (except for Peter Carroll’s gloriously berobbed Pope) are largely replaced by today’s goons of fear-mongering politicians and spin doctors, dismissing “the facts of science” as dangerous ideology.  And yes, we think of climate change deniers; which thankfully Wright doesn’t overplay.

But Galileo still faces the very 16th Century horrors of fire and torture, and reportedly terrified, he does, publicly at least, recant his astronomical heresies.

Brecht’s grand, truly Shakespearean tale is here spliced into 16 scenes, with the familiar Belvoir space remade as theatre in the round. We encircle and judge a lively debate; siding with either a new faith in unleashed science and observed facts, or with state authorities fearful of being undermined and dumb humanity going unchecked. 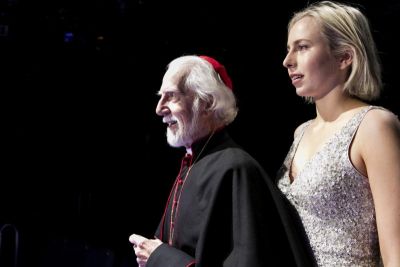 Wright’s language is sharp, vernacular but never gimmicky. Some scenes – like between Galileo and his pragmatic vice-chancellor (Sonia Todd) or with a cluster of sponsors admiring the market value of his new telescope – crackle with articulate energy. Others, with Galileo’s students, his worried daughter and seemingly sympathetic churchmen, are often underdeveloped and emotionally under-baked.   Damien Ryan’s befuddled academic is an exception.

Colin Friels is impishly driven as Galileo, agile in body and voice, but he lacks the gravity of a grappling conscience; and Friels gives few glimpses of the man scheming to avoid the flames.  More needs to be at stake!

Directed by Eamon Flack, with contemporary costuming by Zoe Atkinson, Galileo is a theatrical evening of sometimes engaging debate but it leaves you without much thump to the chest.