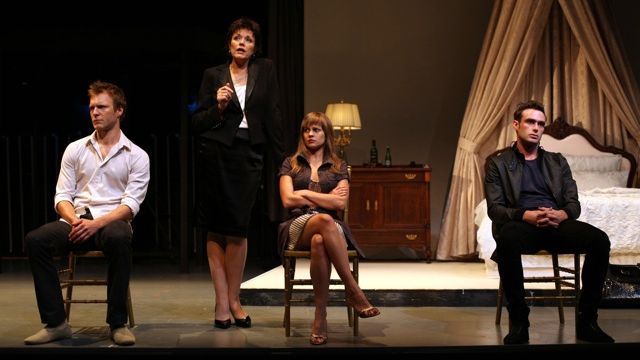 Douglas Carter Beane’s The Little Dog Laughed is an acutely observed, acerbic American comedy. The plot has a high-profile Hollywood actor, Mitchell, wanting to come-out about his homosexuality, his high-powered agent, Diane, desperately trying to avoid him committing this career suicide, his rent-boy lover, Alex, and Alex’s pregnant girlfriend, Ellen. The plum role is the agent Diane, which won Julie White a Tony on Broadway. Caroline Kennison gets to play it here, but she won’t win any awards for this performance. Playing it in an accent you’d never find anywhere in America, you just couldn’t understand her. She consequently she missed fifty per-cent of the laughs, in this lay-down misere comic role. Tom O’Sullivan as Mitchell was believable, but it was Nick Cook as rent-boy Alex who shone. His was an honest and tender performance. Melanie Zanetti also appealed as the ditzy girlfriend. The set was unnecessarily complicated, with the added distraction of stagehands moving and pushing set-pieces throughout the action. Once again Michael Gow showed he is a better writer than a director; once again there was stage business that didn’t make sense (why did the rent-boy jump into bed still wearing his jeans). Once again, QTC took a good play and did not realize its full potential. Pity, because The Little Dog Laughed could have been riotously funny instead of, as is the case here, just plain funny.
Peter Pinne