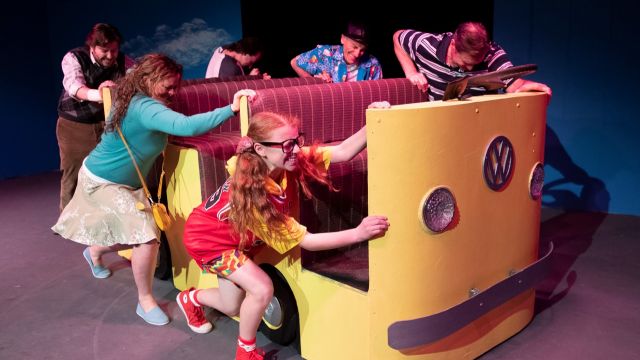 Christmas comes early to Newtown as the New Theatre presents the Sydney premiere of this delightful small-scale musical. Based on the 2006 movie that gave Toni Collette her break into Hollywood, Little Miss Sunshine covers an 800-mile family road trip to California where Olive, the youngest member, can compete in a beauty pageant and be ‘the first Miss America from New Mexico’.

So into their beat-up, clapped-out camper van they pack to accompany perky, vibrant Olive (Kiera Dzeparoski). There’s Sheryl, the matriarch (Fiona Pearson); her out-of-work husband Richard, full of schemes and dreams (Martin Grelis); their moody, absolutely mute son Dwayne who hates everybody and hasn’t spoken for 85 days (Christopher O’Shea); Sheryl’s brother, Uncle Frank, a depressive who has recently cut his wrists (Julian Ramundi); and disreputable, hedonistic Grandpa (John Grinston). With this lot it’s going to be some trip.

The van is soon in trouble and has to be push-started by the entire family unit. But our dysfunctional lot press on, with the occasional flashback, and unlikely meeting in the toilets on the way. Grandpa has a song about being the happiest guy in the van, which is absolutely delightful. They finally arrive in California (crucially, one family member short) a few minutes past the deadline and make the cut only thanks to an assistant. This leads to a sublime rendition of girlish highjinks featuring Olive who gives a spirited take on her Grandpa’s views on feminism. The girls should have been younger but, lead by the outstanding Kiera Dzeparoski, we’ll let that pass. She’s simply fantastic.

Some of the William Finn songs in the show are terrific; some are so-so, easily forgotten. It’s James Lapine, well known as the book writer on a lot of Sondheim’s great shows, who drives events forward. Though why Michael Arndt, author of the original screenplay, doesn’t get a mention I don’t know.

Direction by Deborah Jones is fine in the big numbers, dodgy at other times. But the small cast rise to the challenges of the piece, leaving a rich and satisfying Christmasy glow well after the final number.