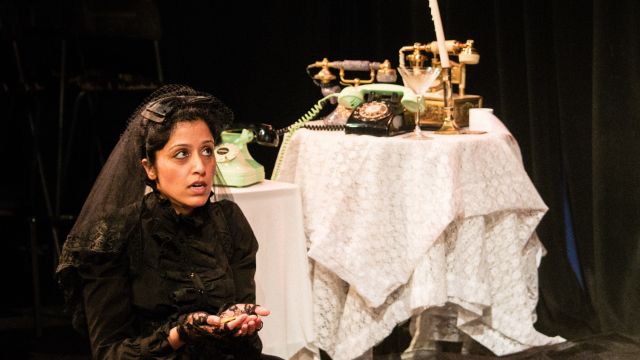 Death is an inevitable part of life, and so why not create a hilarious funny hour around this morbid subject. Direct from Los Angeles Fringe festival, Amnita Dhaliwal and  Gemma Soldati  are here to perform The Living Room - A Comedy of Grief. The show is set around a bunch rules that remind us that we can laugh at our own mortality and mourn the passing of others.

A tally of death is recorded on a blackboard by Dhaliwal, who is dressed in a southern Belle mourning dress. Soldati, in a plain black suit, crawls out from under her hoops. Opposites meet and the symbiotic connection is evident. Together they meld physical theatre and clownish antics.

Death is their double entendre, addressing the exististential freedom of the self with probing gumption equivalent to a Mel Brooks comedy. Their swiveling, jiving and partying hard, has me thinking of Lucille ball and Jerry Lewis. Cocktails and drunken stupors and sweet dance duets between death calls - the audiences are besotted with their outrageous farcical contradictions. 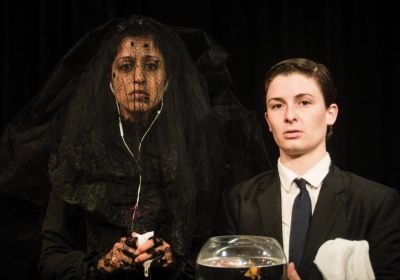 It is important to use one’s voice they proclaim - they attend to their goldfish and announce the death of  “America’s champagne of light”, the suction faced Cher. There is perpetual fabrication and underhanded social commentary unearthed with effervescent zing and cheeky sassiness.

And if you have ever thought of attending a cute funeral, go no further; they lash out big for the sad passing of their beloved goldfish, including a sweet sing-along, sung in Punjabi by Dhaliwal. And there is also plenty of audience interaction, prompted by the devilish pair.

These guys are so damn good they should have their own TV show.