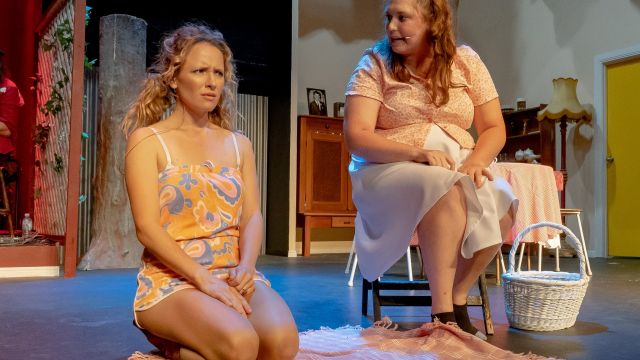 First published in November 1996 this funny, yet poignant, play focuses on the unlikely developing relationship between two deserted wives - polar opposites - coming together through shared experiences and mutual needs in a small outback Australian town.

Vicki (Francesca Spear) is an obedient and repressed housewife anxious to follow the rules of her Catholic faith while raising her children. Vicki, in her attempt to fulfil her perceived role as a wife is forever dutifully awaiting the arrival of her itinerant bulldozer-driving husband. Whereas Rae (Becky Morgan), which she reminds us is not short for Raelene, is a brash, often foul mouthed, impetuous, free spirit who has been abandoned by her rodeo-riding husband of just eight weeks. Anxious to wait in the town where her husband deserted her, Rae lodges with Vicki and finds work behind the bar at The Victory, the local pub.

A play that could easily become bogged down in the misfortune of these two women is instead turned into an appealing, often light hearted play directed with thought and sensitivity by Michelle Watkins and lifted through the songs of Hank Williams, Patsy Cline, Loretta Lynn, Tammy Wynette, Gene Pitney, Margret Roadknight, Johnny Cash and June Carter and the sounds of The Victory’s band, including Laurie Esmond on guitar, George Pulley on banjo and keyboard and Jordon Ferrigno on drums.

On leaving the auditorium I heard only positive comments such as, “that was great,” “I really enjoyed tonight,” “what fun,” and many more of the same which I wholeheartedly agreed with. The songs were fun and meaningful the singing was wonderful and the pairing of the voices of Francesca and Becky in the duets was masterful. The set was excellent. Designed and constructed by Lawrie Esmond it allowed for the transition from house to pub with ease while evoking the spirit of the bush with the clever use of corrugated iron and providing a platform for the band.

Scene changes were many and these came with numerous wardrobe and hair changes. Ann-Britt Riget, hair and props, and Shirley Whitehouse and her team in wardrobe managed this without a hitch. the spots, lighting and sound were all professional and trouble free.

I enjoyed this play immensely and would recommend it to anyone who enjoys fine acting, exceptional singing and likes a laugh and some great country and western songs. For me, it was just another example of the superb community theatre on offer on the Gold Coast.

Lastly, it was heartening to learn that a special Bushfire Appeal Charity night at the theatre on Friday 31st January, raised in excess of $700.00.