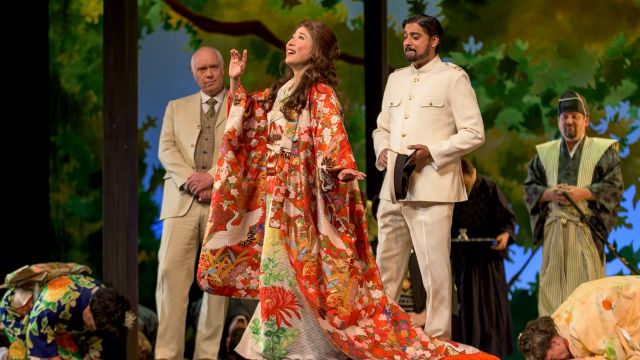 Madama Butterfly is perhaps Giacomo Puccini’s most famous opera. Produced all over the world, it remains a favourite for performers and audiences alike.

State Opera SA’s production originated in Seattle and was brought to Australia by Stuart Maunder and directed by its creator Kate Cherry.

The story (from which Miss Saigon was created) tells the story of Lieutenant B F Pinkerton who falls in love with Cio-Cio-San (Madama Butterfly) and marries her with the option of leaving her after a month. He returns to America, but Butterfly waits for him only to be devasted when her husband returns remarried and asks for her child.

Her only course of action is to use a sacred sword to end her life honourably. Of course, Pinkerton arrives too late save her.

There are many elements that make this production memorable. The direction by Kate Cherry draws every emotion from the music and libretto is well executed, although I did find the blocking of the chorus for the wedding scene clumsy, but that could be the set constraints. I also thought more could be done with the ‘waiting scene’.

The design is by Christina Smith using floating screens and an evocative backdrop; my only concern being the continual shifting of screens, which was confusing and distracting. 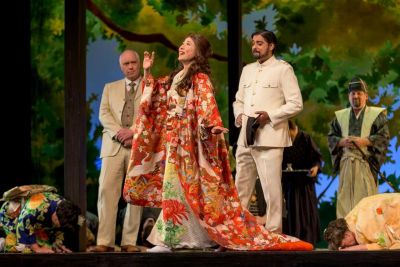 However, the costumes with authentic materials were accurate in appearance and striking.

The lighting by Matt Scott was a highlight- moody, joyous and spectacular all in one evening.

Of course, there is no opera without the orchestra and the Adelaide Symphony Orchestra does not disappoint. Every nuance of one of Puccini’s finest scores is there, thanks to the conductor Tobias Ringborg. The emotional moments of Cio-Cio-San’s performance are extremely moving, both in the vocals and orchestration, as is the orchestral version of the famous ‘waiting scene’.

Mariana Hong brings Cio-Cio-San to life in every way; the vocals, acting, vulnerability, enduring love and resignation are all there. I was particularly impressed by “One Fine Day” which is an operatic standard, but thanks to Mariana, it sounds fresh.

Angus Wood as Pinkerton is the villain every opera lover loves to hate, particularly the boos in the curtain calls. He possesses a crystal-clear tenor voice with fine acting perfectly matched to Mariana Hong’s Butterfly.

Caitlyn Cassidy’s Suzuki was vocally and emotionally perfect, though the measured steps of the Japanese maid did not seem to come naturally; perhaps the emotion of the role took over her movements at times. 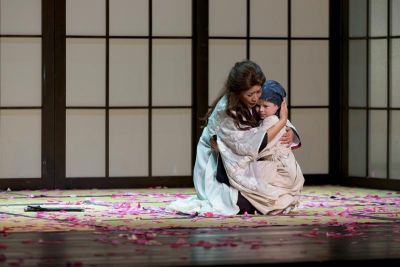 Douglas McNicol just seems to get better and better with every role! His Sharpless was beautifully sung, compassionate and empathic. He is truly the ‘meat in the sandwich’ and one feels for his position in the story.

Although not as prominent as normal, the State Opera Company chorus provided a valuable addition to a principal-dominated opera.

In these days of political correctness and the controversy of yellow face, I found it interesting that the production decided not to present the opera with oriental makeup. While this is commendable, I must confess I missed the touch of illusion visually as the makeup in the cast varied.

Although this production of Madama Butterfly was magnificent in many ways (the end of Act 1, the cherry blossom scene and Cio-Cio San’s aria to her son and consequent death), I judge the production on the number of ‘good cries’ and while it was wonderful, I have experienced more.

State Opera continues to provide quality shows to encourage new audience and I applaud them for this!