Make Me a Houri 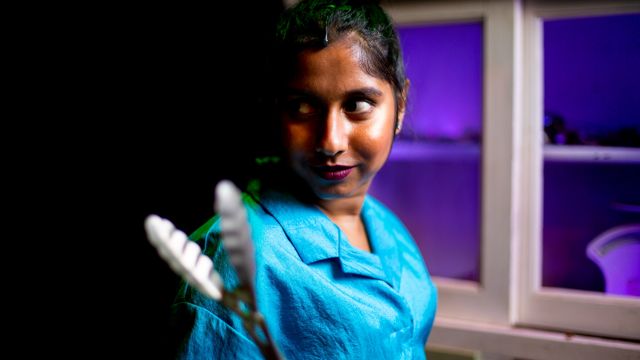 Make Me a Houri dramatises powerful conflicting emotions, profound ambivalence and contradiction – and does so in beautifully written language that is vivid, sharp and poetic.

Two young women (not named, so I’ll use the performers’ names) wait in some form of limbo.  We assume that Emina (also the playwright) is recently dead.  She is discovered prone on a curious white box - a coffin and a freezer?  The floor is carpeted with dead leaves.  As Nisha (Nisha Joseph) ‘wakes’ her, she has pressing questions.  Who and what is a houri?  Can she become one?  Can she become one so as to reunite in Paradise with a lover?

Nisha has been in this limbo long enough to be a sort of guide and to answer the questions – although with a certain ironic and at times almost malicious amusement.  (We never find out what Nishawants or why she is still there.) So, what is a ‘houri’?  Interpretations and translations of Islamic texts differ apparently, but houri (always, interestingly, in the plural) are the ‘fair ones’, the virgin companions of the faithful (male) servants of Islam in Paradise – indeed, they are the reward – all seventy-two of them - of the faithful servant.

Houri have beautiful eyes; they are full-breasted and voluptuous – but they are chaste.  Nisha explains one constraining definition, one essential quality after another, blocking Emina’s every avenue from what she is to what she wants.  Houri do not urinate, defecate or menstruate.  They are hairless, except for the head and eyebrows.  If this begins to sound very much like a familiar, contemporary male fantasy – the submissive, prepubescent sex doll, hot but virginal too - we must remember that these descriptions were set down long ago, are enshrined in sacred texts and bind women now.

The principal contradiction, clearly, is between the idea and definition of houri and the lived life of a flesh-and-blood woman.  Houri exist to serve men.  Emina, we gather, is (or was) both sensual and romantic – even a ‘siren’ as she says in her program note.  Her character is (or was) no virgin – but on entering Paradise, one may be ‘revirginised’; that’s almost a condition.  As this short play proceeds, the contradictions mount up and up until there can be acceptance or… We don’t know.  This limbo?  Forever? As a performer, Emina Ashman’s voice is soft, and her emotions are rather understated so that we engage in her dilemma rather less than we might.  Nisha Joseph’s lively glee is winning and diverts our attention despite her being almost entirely a functional character.

In the end, Make Me a Houri is not so much a drama as what used to be called ‘a dialogue’ that lays out and explores the conflict between dogma and emotion, between fantasy and reality.  It is, we gather, a very personal investigation for Emina Ashman, who came to Australia from Malaysia only in 2012.  Her play is simultaneously sad, funny, touching, ridiculous and horribly frustrating.