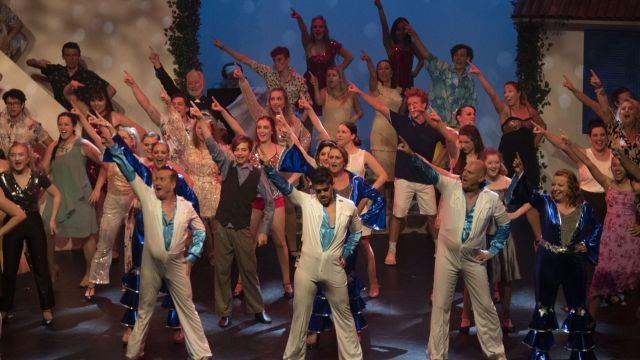 Australians can take much credit for the success of Abba, the group who these originally made these songs hits. Since its debut on the English stage in 1999, this musical has drawn mass audiences around the world and was the basis for the movie of the same name – and a sequel. Set at a small tourist stop on a Greek Island, it tells of the coming wedding of Sophie who does not know her actual father and thus invites the three possibilities to give her away. It goes from there and is driven by the popular Abba music.

Director Madeleine Johns has assembled a strong cast, particularly with the four main female roles, while moving a very large ensemble cast of both singers and dancers with fluency and vim. The set was an open space that needed little adjustments for the changing scenes. It was great to see the boat with the fathers “float” across the stage to the pier. Well done. 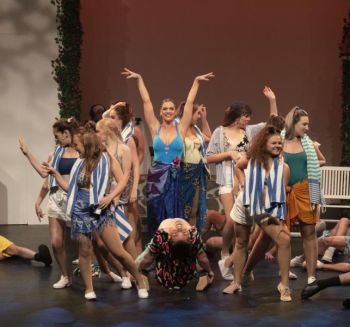 The most demanding role was that of Donna, the mother of the bride to be, as she had to cover the full range of emotions. She did this well and matched that with her singing. Congratulations to Meg Kiddle for this performance. Georgia Burnett, as the bride to be Sophie, gave a very good performance as the centre of the events of the musical. They were ably assisted by Melanie Fuller as Tanya and June Tretheway as Rosie, who were Donna’s friends and old singing partners of years before. They added some necessary humour. Charlie Harrison, David O’Keefe and Matt Leigh played the three fathers quite competently. Matt Leigh as Sky needed more strength of character. The large stage area was fully utilised to allow the dancers to move with such fluency.

Madeleine Johns has the habit of presenting challenging musicals with very large casts – over fifty this time – and has done so very well indeed this time.   A really good show in most aspects – and with the Abba music.