The Man In Black – The Johnny Cash Story 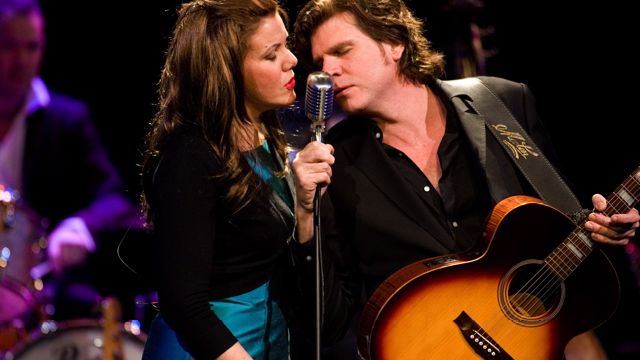 Johnny Cash always opened his concerts with the introduction: 'Hello, I'm Johnny Cash.' His distinctive baritone voice was utterly unique and his demeanor and dark clothing earned him the nickname 'The Man in Black'.

In The Man in Black - the Johnny Cash Story at the Twelfth Night Theatre in Brisbane, Tex Perkins wore Cash's traditional dark garb and his demeanour was appropriate for a self-described (in Perkins' program notes) storytelling balladeer and hung over melancholic philosopher. But it was once again made clear that there was ever only one JR Cash and neither Tex Perkins nor Joaquim Phoenix in his film portrayal (or any other impersonator for that matter) could ever fully capture Cash's outlaw, highwayman character or musical genius.

That said, Tex Perkins had a damn fine shot at it, growling and strutting his way through a treasury of Cash's songs - Ring of Fire, I Walk the Line, Folsom Prison Blues, Sunday Mornin’ Coming Down, Get Rhythm, A Boy Named Sue, Hey Porter and a dozen more. In the early numbers Perkins was overly introspective and when he knocked his microphone stand to the floor I thought he might be channelling a little too much of Cash's 'walk on the wildside' spirit, but by half time he had hit his straps and the audience was clearly loving his reincarnation of the Man. The second half featuring the classics 'If I Were a Carpenter' 'Ring of Fire' and the heart rending 'Hurt' penned by Nine Inch Nails was a step up and with a little less melancholy and a little more of the Cash gravel in his voice and 'mongrel' in his performance, Perkins could be the personification of the great man.

Rachell Tidd's performance as June Carter lacked a little bit of edge (three times married, an author, actress and comedian as well as a singer and songwriter June Carter was no wall flower) and I thought that there wasn't a believable chemistry between her Carter and Perkins' Cash. But Tidd's voice was on song (if lacking a little of the Carter raunch) and her 'Jackson' duo with Perkins was one of the highlights of the show.

The storyline took us through some of the most significant moments in Cash's life including the death of his brother as a young man, his failed first marriage, his struggle with drugs and alcohol and then final redemption through June Carter's unstinting love and support. For mine the 'stand and delivery' of much of the storyline by character narration was a little too static. But
Cash's stumbling journey through life was so remarkable that the audience was fully engaged in any case.

The backup band of The Tennessee Four was all you would expect of a team of experienced talented musicians. They didn't miss a beat all night.

Hats off to the Twelfth Night theatre and producers Andrew Barker and Simon Myers for putting their money on the line and bringing to life such a fine and musically vibrant tribute to one of the greatest musicians of all time. There's plenty of potential in this show and with a little more work it could well be worth a second visit. As it is the audience clearly enjoyed it for what it was - a great night out and a very entertaining piece of musical theatre.