The Man from Mukinupin by Dorothy Hewitt, with a score by Jim Cotter. 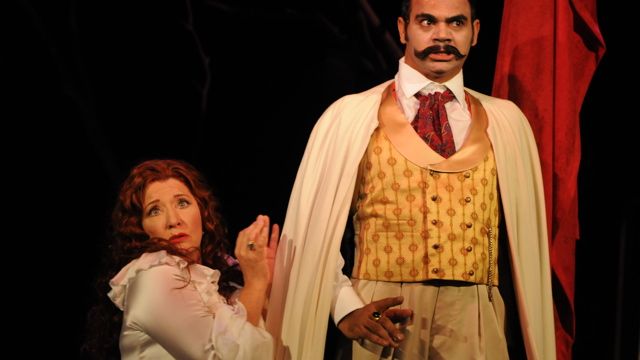 Dorothy Hewitt's Australian theatre classic The Man from Mukinupin is set in the fictitious small West Australian wheat-belt town of Mukinupin during World War 1. Encased in a small town scenario in which Hewitt wove a light musical, her play exposed Australian society at the time when brutal racism existed.
The Man from Mukinupin (a place to muck up in) is a flamboyant kind of play, and this is the approach director Wesley Enoch has taken. 'We have imagined a 1950's travelling troupe of white and black actors setting up camp on a salt pan plain to perform the show, a troupe of actors led by an old style actor/manager who creates a theatrical world of vaudeville and Weill-inspired numbers to tell a story.'
Enoch's approach is an inspired one, and his troupe revel in it. Many in the cast played multiple roles with memorable energy and flair, including Craig Annis who showed off a great voice as brothers Jack and Harry Tuesday, and Suzannah Bayes-Morton, who displayed her versatility playing both Polly and step sister, Lily.
Music was a driving force. Musical director Alan John, along with Daryl Wallis, played away at the fringe of the stage on a variety of instruments including the piano, organ, tuba and double bass. In one of the play's highlights, they were joined by one of the cast, Valentina Levkowicz (Clemmy Hummer), who did an inspired burst on the violin.
Through the play changes of scrim were cleverly used, allowing for some great background settings and some stunning illusions and silhouettes.
David Kary

Following it's Sydney season, The Man from Muckinupin will play at the MTC Theatre, Southbank, Melbourne from June 6 to July 19