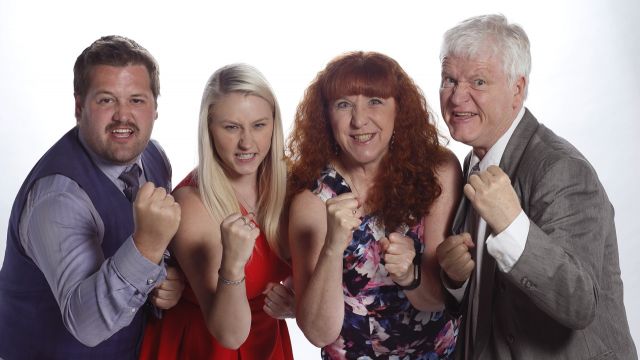 Matt Byrne has been bringing his self-written and directed pieces to Maxim’s Wine Bar during the Fringe for 22 years. This year his offering is a piece that “takes marriage right up the aisle”.  Married at First Fight is a spoof of a well-known and in my opinion asinine reality television show – no prizes for guessing which one.

Byrne offers us four horribly contrived and stereotypical characters who are ‘competing’ on the show. They are 60-year- old accountant Ron Turn (Matt Byrne), who loves to collect barcodes, race pigeons, watch the ABC and take care of his cat Fluffy – his wife went out for milk and never came back, it’s easy to understand why.

Then we have Valerie Salmon (Rose Vallen), a woman of a certain age, for some reason a former ice dancer, who has been foolhardy enough to be married seven times. She was a great housekeeper – she “always kept the house” – why then is she taking part in the competition one wonders.

The other female character is the peroxide blonde, tits and teeth, high pitched drawling, Kylie Cleavage (Amber Platten).  It goes without saying that she is a former grid girl and Frozen princess who spent her childhood competing in dance competitions. She is the butt of most of the evening’s Benny Hill-esque boob jokes.  Could the misogynistic pigeonholing be laid on any more thickly?

Finally we have Barry Bignote (Brad Butvila), a financial adviser, self-funded by other retirees. He has been engaged 15 times using the same ring, questions our society’s preference for monogamy and is captivated by Ms Cleavage’s cleavage.

The funniest moments in this show happen when the four break away from these largely unlikable characters, to sing some musical numbers and interact with the audience or perform some skits reminiscent of Laugh In.

Despite several moments of lost lines the night I saw the show, the cast work hard with the material.  They’re all strong and talented performers let down by a misguided concept.

Unfortunately, a spoof of a crass television show really has nowhere to go other than being even more crass, so if that’s not your cup of tea you won’t find much in this show to enjoy.

If the number of audience members who left at interval on the night I attended is anything to go on I would say that this piece only holds real appeal to the lovers of Married at First Sight…or perhaps Benny Hill.