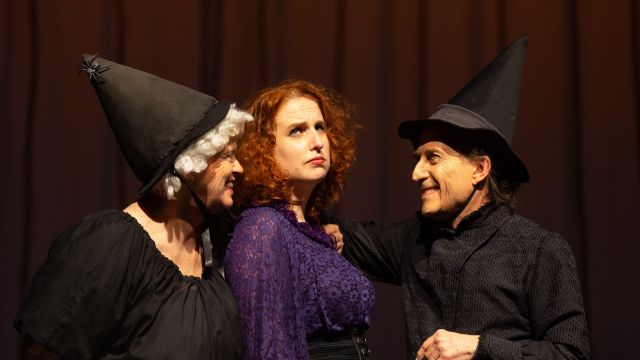 Once more we venture in to Discworld, where the abnormal becomes the norm. All is not well in Ankh – Morpork Opera House - as a ghost stalks the corridors while leaving strange letters for the management and killing staff. Granny Weatherwax and Nanny Org, two Lancre witches, come to investigate. That is only one step on a complicated journey through the extremes of Terry Pratchett’s writing, with an opera house and company as the linchpin for the action. Thus, there are the dancers and singers to flavour the happenings. This adaption works well. So often, the Pratchett storylines are so complicated that they do not transfer successfully to the dramatic setting of a stage. Here the audience could follow the plot with ease even without having read the original book.

Director Steve Beeston, aided by assistant director Kirstin McLean, has achieved this success by using an open adaptable set, cast well and maintained a sense of unity in the whole production. In a generally solid cast, several performers were outstanding. Sally Daly and John Grey, as the witches, were both central, and critical, for the success of the play and they were outstanding. Well done. They were a “nice” but nasty pair. Several others were also outstanding in this strong cast and they were Nick Daly as Walter Plinge, Callum Pulsford as Mr Salzella, Aubry Thonon as Seldom Bucket and finally Tallulah M.E.Grey as Agnes Nitt. These were in the major roles but there was a good solid strength throughout the entire cast.

Maskerade, as presented by Brisbane Arts, was a challenging but enthralling production. Whether you are a Terry Pratchett fan or not, this ensemble cast has presented a great night of entertainment. I advise you to go.