The Merry Wives of The Merchant of Venice (or Windsor) 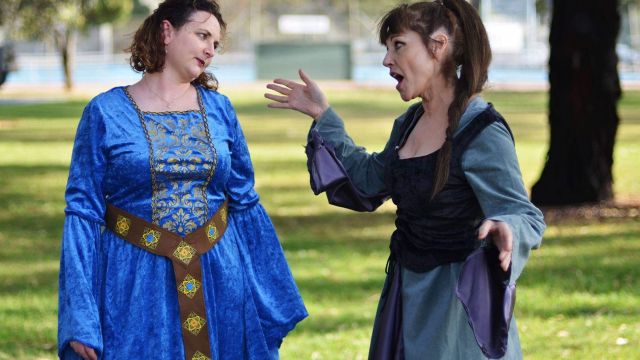 There are many things about this Raw Shakespeare Project’s production that are wonderful, not least it being performed under the banner of ‘Shakespeare in the Vines’ at a number of South Australian vineyards, including Tapanappa Wines in the Adelaide Hills, which is where this production premiered.

As The Adelaide Theatre Guide states, ‘Checking in at an hour each, these shows combine to showcase the best wit and wisdom of the Bard in the finest outdoor locations’. The respective wonderful ‘locations’ may well complement the ‘wit and wisdom’ of the Bard, however these two independent adaptations are not strictly Shakespeare’s plays. The basic plotline of each play remains the same, but these judicious and clever adaptions, with the addition of some notable casting of specific roles, has resulted in basically creating two new one-act plays.

Raw Shakespeare’s claim that the focus of these adaptions, and in particular The Merchant of Venice is ‘love’. The reality, however, is that there isn’t much ‘love’ on display in either play. In The Merchant of Venice Bassanio (Chris Braydon) is a young man who is surrounded by older and more mature women, including Portia (Nicole Richardson). He woos and wins her as in Shakespeare’s original play but little romantic love is happening here. Poor Bassanio has other problems and only receives one kiss from Portia, which occurs at the very end of the play, and even that is just a quick peck – on the forehead. The focus in this adaption of The Merchant of Venice is not ‘love’ but more like a battle of the ‘cougars’. The female characters in the play are all played by and as mature women. This includes Portia, Nerissa (Maxine Elizabeth), and a new character, Antonia (Myf Davis).

Antonia is an amalgamation of Shakespeare’s original characters - Antonio and Shylock, with a touch of Gratiano added for good measure. Antonia is a mature women, a successful Venetian merchant and romantic female rival of Portia for the love of the younger Bassanio. His rejection of her in order to woo Portia is the trigger that motivates her desire for ‘revenge’ and the bond forfeit of a pound of Bassanio’s body. In a clever subversion and substitution of Shylock’s motivation based on being discriminated against because he is a ‘Jew’, Antonia’s resentment is because she is ‘old’ – a generational resentment and tension. This tension continues in Belmont as Portia, as well as Nerissa, are noticeably older than the much younger Bassanio. Subsequently, in the climactic trial scene in which Portia appears in disguise as a lawyer it is not so much about Portia saving Bassanio’s life as obliterating her rival, Antonia.

The dramatic truth is that by making Portia and Antonia mature women, rivals for the younger Bassanio, and resentful of anyone and anything that opposes their independent wills and desires, this clever reworking of Shakespeare’s original play is more about female rivalry and power. It is a bold and radical subversion and reworking of the original play and it works rather well. In The Merry Wives of Windsor the radical and bold subversion continues. Conventionally, the ‘merry wives’, Mistress Ford and Mistress Page are traditionally played by mature adult women. In this adaptation they are played by young women, Bianca Vanderberg and Shannon Gray. Whilst in many ways this adaptation was a much tighter production than The Merchant of Venice, nonetheless, the radical subversions did not work as well. Despite the overall fun and the zestful and clear performances by the ensemble, including Damien White’s Falstaff and Jabez Retallick’s Ford, here was an overall coldness. It was all a lot of fun and well performed, but something was missing and that something was ‘love’ – mature ‘love’.

The Merry Wives of Windsor is a comedy about redemption – essentially the redemption of old Sir John Falstaff who is one of Shakespeare’s greatest characters; a blessed relief after his humiliating banishment at the end of Henry IV Pt. 2. In The Merry Wives of Windsor he boldly flirts with two local wives of Windsor. Nothing serious happens but the women decide to teach him a lesson and humiliate him three times for his presumption and audacity. There is a lot of fun in the three tricks the ‘merry wives’ play on Falstaff but ultimately he is forgiven and welcomed back into the community. Why? Because he is genuinely loved, and in reality he hasn’t actually done anything bad. All this is still there in this current version, however, as with The Merchant of Venice, removing the ‘gravitas’, the romantic depth and meaning of the characters, is problematic. Despite the overall excellence of the performances, by making the ‘merry wives’ young women instead of mature women, as well as not making Falstaff old but a rather pompous, camp clown, robs the play of its inner warmth and depth. It still is a lot of fun, but the shifts in the characters’ age, making them all younger, also shifts the essential purpose of the action and drama from warm redemption to cold revenge. It may resonate with contemporary concerns and the #MeToo movement but in this production the forgiving of Falstaff and welcoming back into the community seemed rather imposed, an uncomfortable add-on conclusion rather than the ultimate goal.

Despite these reservations, the freezing weather, and some questionable acting choices, nonetheless, the sheer audacity and boldness of these adaptions by Raw Shakespeare, and that they are being performed in such wonderful ‘locations’ like Tapanappa Wines can only be applauded.