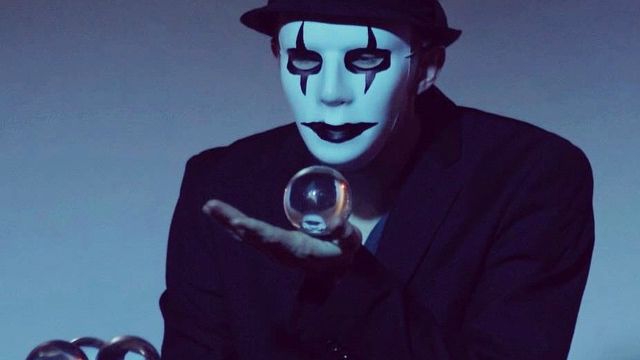 Sleight of hand (also known as prestidigitation or legerdemain) refers to fine motor skills when used by performing artists to entertain. It is closely associated with close-up magic, card magic and flourishing.

Mesmerise: Night of Intrigueis that and more. Set in the austere library of Ayers House, the musty and slightly claustrophobic atmosphere is a perfect setting for magic, being somewhat reminiscent of an Agatha Christie murder mystery.

Our host for the night is Razi, a 26-year-old magician. Dressed in a black short sleeved t-shirt (nothing up his sleeves) and using a camera focussed on a black stand to capture his actions and project them onto a screen, he proceeds to amaze us with card tricks and Rubix cube solving.

Paring his routine back to the bare bones of card manipulation means there is nowhere to hide, especially on camera. Razi extensively uses members of the audience to assist him. At the performance I attended he used some very young children as his assistants, no mean feat for any performer.

Combining cards and moody ethereal music he uses the cards to tell stories, fortunes, misfortunes and playing a bad hand well. My Uncle was a magician and so I naturally watched his hands very carefully and I found his trick using 4 aces particularly mystifying.

While I thought I saw through some of the sleight of hand work, at the conclusion of the trick I hadn’t! His dexterity was commendable, especially for someone of his young age.

I have seen a lot of Rubik’s cube speed solving on screen, but when you see it up close (projected on the screen) it is impressive (51 seconds at the performance I saw). Razi does not stop there though, he combines this with magic. At times the cube seems to solve itself with a wave of his hand.

His last card trick involving 5 members of the audience and a deck of seemingly blank cards, is perhaps the most impressive but a good magician does not reveal his tricks and neither will I!

A little more patter while manipulating cards would cover the silences while his tricks are being performed, to give the show a better flow, but this is my only reservation.

Razi has played across the country and overseas including on the Las Vegas strip and deserves our support for what is these days a dying art.