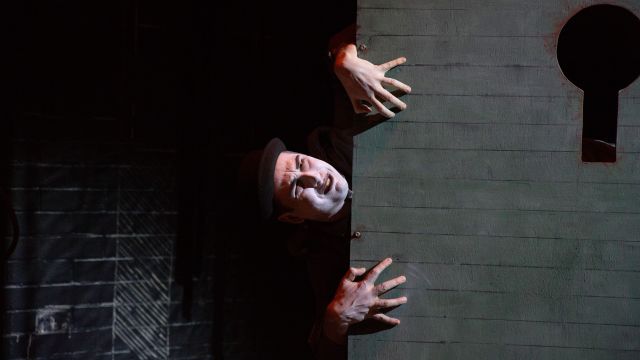 Gregor Samsa feels trapped and desperately unhappy in his job as a salesman. Needing to support his parents and sister, he can see no logical escape. Then by some miracle he finds an illogical one—by transforming into a giant insect.

Meticulously stylised, combining elements of puppetry, clowning, cartoon and physical theatre, The Street’s production of Metamorphosis is both gorgeous to look at and thought provoking. This version strips back some of Berkoff’s 1970s styling to hark back to the magic realism and eastern European flavour of Kafka’s novella.

What the audience experiences is a moving artwork which seems to combine elements of constructivism, which was the Russian revolutionary art answer to surrealism, with the nightmarish visions of Bosch. Stylistically chunky, deceptively simple, flat both of palette and depth, the world created is claustrophobic and anxiety provoking, yet beautiful to look at. The makeup itself is mask-like—by using only black and white, the cast create cartoon-inspired faces with startlingly exaggerated expressions. Later on when lesser characters are represented by masks, they blend into the aesthetic form perfectly. Meanwhile, behind them on the wall are three beautifully lit cabbages, looking like brains in vegetable form, perhaps symbolising the three non-insect members of the family. 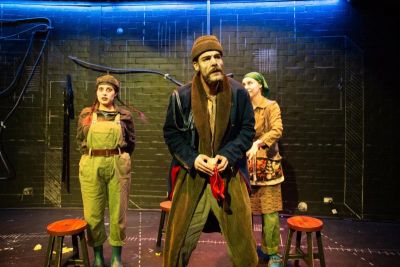 Broinowski appears to have made the decision to use irony in the characterisation, making Gregor (played by Dylan Van Den Berg) more natural and human than his family even as he becomes an insect, perhaps to engender empathy towards him as he grows more disgusting to look at. I think I would have liked to have seen more even physicality from the character, insofar as that was possible the limitation of the confined space he has to work within, if only to balance the striking choreography of the rest of his family. The dance-like complexity of the action outside Gregor’s room by his family (played by Christopher Samuel Carroll, Ruth Peiloor and Stefanie Lekkas) is mesmerising to watch.

One of the joys of symbolism is discussing the interpretation, both of the text as written and the specific production. Here, it’s never clear whether Gregor’s transformation into an insect is literal or a form of illness. If one takes the latter interpretation, the abject cruelty of his family’s response becomes abundantly clear.

This form of non-naturalism seems to have fallen out of fashion so it’s wonderful to see this adaptation of this absurdist classic.