The Mikado by Gilbert and Sullivan 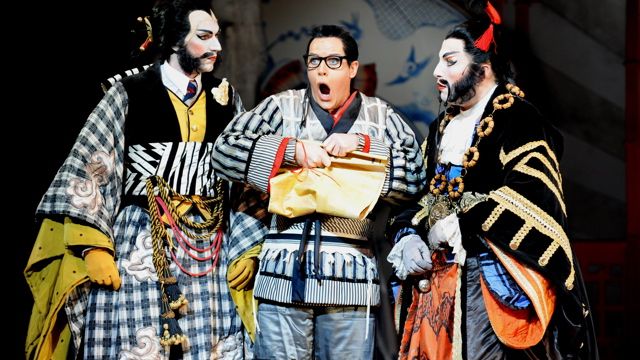 Gilbert and Sullivan has long been the financial saviour of Opera Australia – Anthony Warlow playing Ko-Ko, the coffers no doubt will be filled again by this operetta written in 1885.
Added to the mix was a sumptuous set, gorgeous costumes and sweet if slightly timid music.
With anticipation I waited for the appearance of the Lord High Executioner.
Alas when Anthony Warlow first spoke – I winced.
The music theatre superstar reprised his impersonation of Captain Jack Sparrow from The Pirates of the Caribbean movie which he used in The Pirates of Penzance. It was an odd fit and combined with over the top milking of gags took the edge off this production.
There was another lumpy acting performance from the other male lead Kaneen Breen as Nanki-Poo the son of the Mikado. His flamboyance made some in the audience doubt that his professed lust for Yum Yum was possible.
The more traditionally performed roles gave some relief. Warwick Fyfe as Pooh-Bah was very solid. The Lord High Everything Else beautifully demonstrated that he wore many hats in Government – by balancing them on his head. The wit and depth of Richard Alexander shone as the Mikado.
But for me the real star was Adele Johnston as the fearsome Katisha.
A wink from her would send any man running.
David Spicer

Editor’s note: With frequent nudges and winks at British Music Hall tradition, combined with a touch of St. Trinians, in this production (which has been around since 1985) the role of Ko Ko seems, for mine, has been re-interpreted along the lines of a Cockney Music Hall comic turn to match that vision. Anthony Warlow never quite nailed it. I loved the hybrid British / Japanese costumes, even though there is really no need for a visual reminder that the Japanese set opera is a satire of things British. Neil Litchfield