Ministers of Grace – The Unauthorised Shakespearean Parody of Ghostbusters 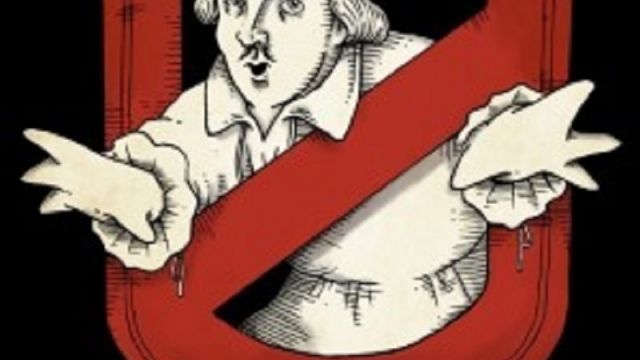 Whom wilt that call? A Shakespearean question from a legendary 1980s movie is the starting point of REDuck’s parody; even before we’re settled in our seats, this group from Norwich are strumming the theme tune on a lute and engaging the audience before the lights dim.

It’s a humorous premise: what if Shakespeare wrote Ghostbusters? It’s not as funny, though, stretched over eighty minutes, scene by scene of the entire movie.

The ghost’s soliloquy shines and the peppering of the script with lines from the Bard’s other works keep the Shakespeare scholars tittering, but it’s missing pace to keep us going from joke to joke.

There’s more than a nod to Python in its execution and the barely-contained energy of the cast is sometimes infectious, other times annoying.

Hayley Evenett pushes through the silliness with strong performances as Dana and the Gatekeeper; Alisha Hart is great as Janine and Helen Fullerton is decent as Sir Ray – it’s a long laugh through her thought of the puff’d man of custard.

The set is uninspired yet the Elizabethan proton packs are wonderful, the lighting is utilitarian but costumes are great – the incorporation of more modern elements worked well.

It’s a comedy, a silly one, but there are missed opportunities to build tension, feel conflict and release redemption – from both sources. Instead, this mash-up is a bit lumpy.