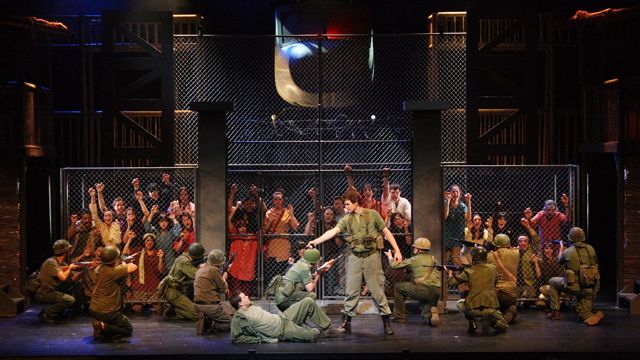 Miss Saigon, directed by Jimmy and Lori Barton, is easily the best musical ever produced by the Cairns Choral Society. It tells the story of Kim, a Vietnamese girl who falls in love with Chris, an American GI, in the closing stages of the Vietnam War. Unknown to Chris Kim gives birth to his son, Tam. However, some years later, Chris goes back to Vietnam to find Kim and Tam.
This production has it all, from great sets to powerful voices and acting blended, to make Miss Saigon an emotional roller-coaster. The scene changes were fast and faultless accompanied by effective lighting. The evacuation scene from the US embassy in Saigon, complete with helicopter and crowds clawing at the wire fencing, was worth the entry money alone. This was one terrific scene.
Carly Forsyth as Kim gave a powerful performance as did Andrew George as the Engineer and Jarred Brose as Chris while Katerini Manolatos, as Helen, Chris’s American wife, gave a strong performance. The emotion, however, was generated by little Max Koch as Tam. He said nothing but his very presence had the audience scrambling for the tissues.
The unsung heroes as always were the orchestra lead by Lauren Hannay, while the choreography from Julia Macalpine was superb.
Miss Saigon is brilliant theatre and all accomplished by locals.
Ken Cotterill