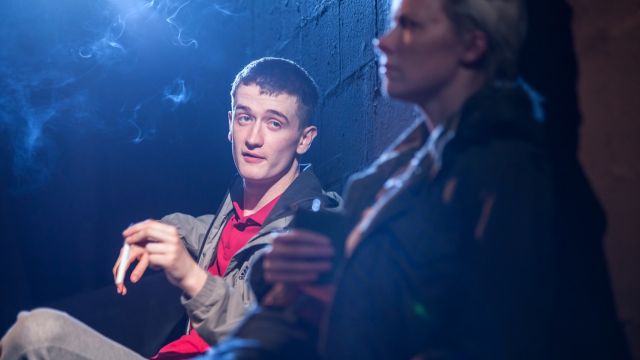 Mouthpiece, written by Kieran Hurley, is a moving, thought provoking piece of theatre about storytelling. It jars us into thinking about ownership. It asks us who owns the story. Should stories be appropriated by others?

"Everyone has a story," says Libby (Shauna MacDonald), the writer in the play. "Naw," replies Declan ( Angus Taylor), "Some ay us just have lives."

Set in Edinburgh, Mouthpiece harshly contrasts the lives of a depressed, middle-class, Scottish writer and a teenage boy who comes from the rougher part of town. They meet on Salisbury Craggs, when Libby, the writer, has come to a crunch point in her life where she feels she has lost her purpose and her own voice. 17-year-old Declan sees her on the edge of the precipice and saves her life. An uncomfortable friendship is born. With each comingfrom very different backgrounds, there is much tragic irony in their relationship.

The stage holds them constantly in a giant picture frame (designed by Kai Fischer) as the play begs us to ask whether we can just take snapshots of people’s lives and write about them as if our own.

Libby espouses to Declan how difficult her life has been as a playwright and savagely addresses the theatre industry, where plays are “political enough to make people feel good about themselves for having ‘engaged’ but not to actually provoke anyone to do anything about anything”. This difficulty in her life, when set against the inbuilt socio-economic and cultural difficulties Declan has grown up with, are the reason why there is a no real hope of the two meeting on common ground.

Libby finds Declan to be a talented artist, recognising his ability and elects herself to be his voice – the ‘mouthpiece’ of the play’s title.  As with any ‘cultural takeover’ this is doomed to fail. 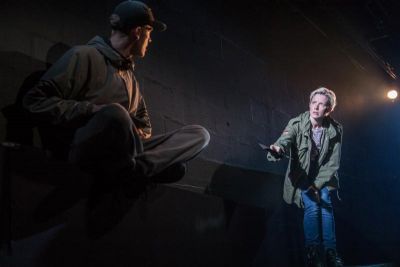 The hold that the middle classes have over the arts and the lack of opportunity for the impoverished to express their creativity because of their situation, is a strong theme in the play and pleads with us to do something about this.

Libby sees Declan as an opportunity also for herself; to become his saviour and  mouthpiece, telling his story as her new play. This is extremely clever writing, enhanced by deft, pacy directing on the part of Orla O’Louglin.

Libby separates herself from the action as the audience is addressed ‘lecture style’ about the rules of writing a play - how to create the orientation, build to a climax and leave us with a ‘final image’. This is brilliant writing as it puts a spotlight on ‘who creates the rules’? ‘Who decides how a story will be used and how it will end?’

As Libby mines Declan’s life for information to build her play we see the lines between his life and her play blur. Declan’s life is slowly being cannibalised by Libby who begins to find her voice again by taking away his. Early in the piece we learn Declan has drawn a picture of his little sister reaching upwards framed by Edinburgh’s skyline and hovered over by a huge red mouth. The ‘Mouthpiece’ of the title. The comment is made that the mouth could be trying to ‘say something’ or maybe trying to ‘eat it all up’. This irony is not lost in the play whereby Declan’s voice is slowly ‘eaten up’ by Libby and the society with which he battles.

This play would not work, however, without the two fine actors. Angus Taylor is superb as the very physical but vulnerable Declan. He is tortured and angry but allows us in through chinks to see his softer loving side. Such beautiful light and shade. 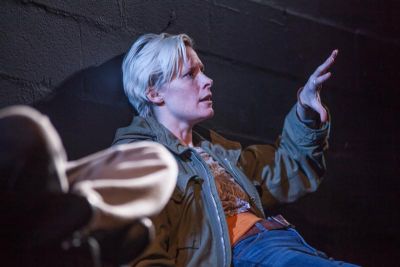 Shauna MacDonald is outstanding as Libby. She builds the character with measure and we believe every moment. The chemistry between them is palpable.

Mouthpiece is gripping and has us guessing outcomes, completely changing expectations at times. It uses the stage cleverly and the action is gritty and real - so much so that in Act 2 we find ourselves as players in the action. The climax is breathtaking.

Kieran Hurley’s Mouthpiece is a must-see piece of theatre - we believe the characters and whilst their reality is harsh and uncomfortable, the play has some beautiful natural humour.

This piece is authentic and clever and, on many levels, asks us to question our right to appropriate the stories of others. It makes important comment upon the limitations of narrative.