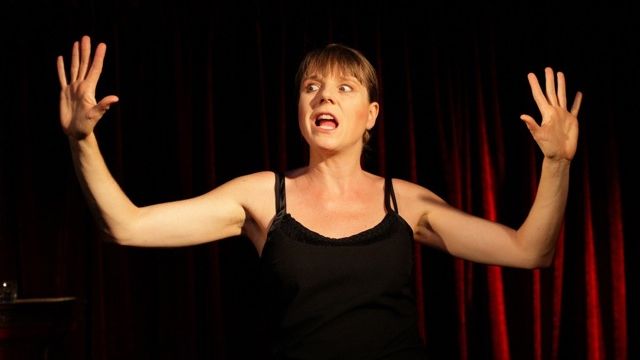 Organised crime descended upon Sydney like a plague in the late 1920s and burrowed deep under the belly of Darlinghurst and Kings Cross. Loopholes in laws governing alcohol, weapons, prostitution, gambling and drugs, along with rampant corruption amongst police, judges and politicians, enabled Tilly Divine and Kate Leigh to become the ‘Queens of the Underworld’. They profited enormously from Sydneysiders love of vice. Over 500 vicious attacks with ‘cut-throat’ razors lead to the inner east being nick-named ‘Razorhurst’. Other ‘colourful characters’, such as ‘The Little Gunman’ Frank Green, ‘Darlo Push’ lad Guido Calletti and north shore bred prostitute and mistress of many, Nellie Cameron, inhabited the grimy lanes, rancid sly grog shops and tawdry bordellos of Razorhurst and became part of Sydney’s crime folklore. Vashti Hughes has mounted a tour de force one woman show, telling tales from this period. She plays all the characters and sings bawdy songs celebrating the notorious events of these lustful and violent times.

Some of the many highlights of the show include; Tilly ‘disappearing’ the wallet of an audience member, flashing a tit at another, playing Kate delivering her own obituary and Frank Green being ridden hard by Nellie, continually delivering perfectly timed punches to her head whilst building to orgasm. Frank’s song is elegantly titled “Biff, Whack, Bash”. My personal favourite was the sad and sinister, ‘Funeral Fuck’ ditty.

Each character has their song and Vashti is accompanied by the very capable Ross Johnston on piano. Lighting and sound FX are controlled by director James Winter. It’s a tight and talented team and they deliver an exciting and engrossing production.