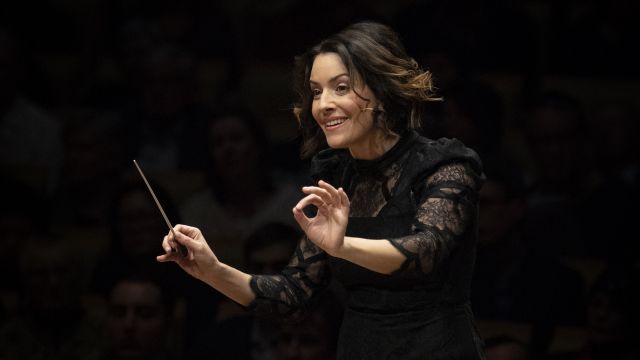 On his premiere performance in Australia, Austrian ‘wunderkind’ Martin Grubinger showed why he is regarded as possibly ‘best multi-percussionist’ in the world. Surrounded by a battery of 23 percussion instruments, and playing from memory, he demolished Avner Dorman’s Frozen in Time in a frenzy of breathtaking mastery. To say it was an adrenalin pumping, white-knuckle, edge-of-your-seat rush was an understatement.

Dorman, a young Israeli-born composer now living in New York, was commissioned by Grubinger to write the work which he divided into three movements (“Indo-Africa,” (Eurasia,” “The Americas”) that each depict one of the land masses that emerged from the primordial continent Pangaea.

Playing a variety of instruments that included cow bells and gamelan but mostly marimba and vibraphone, Grubinger showed his dexterity and command of the instruments with astonishing skill and an audience-winning joire de vivre. It was infectious. The rondo finale was a melting-pot of American cultures with nods to Broadway, jazz, swing, and Seattle-grunge rock, all wrapped up in what sounded like a homage to Bernstein’s excessive dance rhythms of West Side Story. 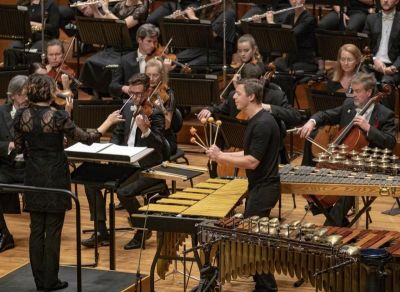 Resident music director Alondra de la Parra, back from her European sojourn, also did an amazing job conducting the orchestra in this terrific contemporary score which brought a wave of fresh air into the classical repertoire. The standing ovation was spontaneous and Grubinger encored with a playful but virtuosic kettle drum solo and again won the hearts of the hall.

Aaron Copeland’s Suite from Appalachian Spring opened the concert. Called the “Dean of American Composers”, Copeland’s work debuted in 1944 for a Martha Graham ballet set in the nineteenth century in rural Pennsylvania, focusing on a bride and her husband-to-be, a preacher, his flock and a pioneer woman. In its orchestral form, it has since gone on to enduring popularity and has become the piece that personifies American music.

From the effective clarinet opening sunrise, to the fiddle and square-dance sequences to the variations of the Shaker hymn “Simple Gifts” and the brass chorale finale, it’s an inspirational work with music deeply rooted in community. Once again de la Parra’s baton work was exemplary, bringing a buoyant and lyrical feel to this iconic piece of Americana.’ 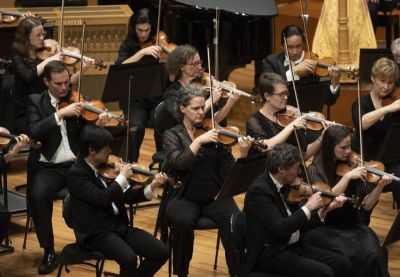 If Copeland was the “Dean of American Composers, then Dvorak was the beginning of American music bridging the old (European tradition) with the new. His New World Symphony No. 9, the final item on the program, is as popular as Copeland’s, drawing on African-American and Native-American spirituals and plantation songs, with nods to his native Bohemia. The luminous flute at the beginning of the First Movement, to the Second’s recurring English horn theme known as “Goin’ Home” and the allegro con fuoco finale, the sweep of the work was joyful, pensive and palpably exciting.

If the evening reinforced anything, it’s that no one conducts the QSO quite like de la Parra. After three years at the helm her lustre is still shining brightly.