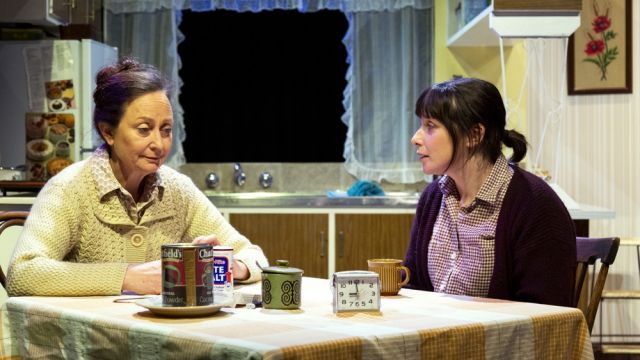 On a Saturday night, on the outskirts of a small town somewhere in the southern states of the U S of A, Jessie (Esther van Doornum) goes up to the attic, gets her Daddy’s gun and tells her Mama she intends to kill herself that very night.

But even before this studied announcement, Jess’s mother Thelma (Caroline Lee) sits alone on her couch in her drab, dull little house – deliberately and cleverly designed by Juliette Whitney with nice period detail – a house without a sign of colour, style or imagination.  Thelma stares into space and such is Caroline Lee’s ability as an actor, we already know so much about her without a word of dialogue.  It is a portrait of such stasis, loneliness and discontent just held at bay that it is distressing to see in itself.  So unhappy, so guilty is Thelma that we might even think that she is the potential suicide.

So, mother and daughter begin a kind of dance macabre around each other in which Jessie is cool but adamant and Thelma pleads.  No, Mama, too late.  Jessie has it all worked out, listing detailed instructions for ‘after’, and working through her Saturday night routines – like topping up the jars of ‘treats’ and happy to do Mama’s manicure…

What makes the progress of this Saturday night – ‘normal’ but for Jessie’s intention – so intriguing and ghastly is our realisation of how angry and manipulative Jessie is.  She knows exactly what she is doing and exactly the effect she is having on her mother.  The two of them have, as it were, failed at just about everything and Jessie’s plan to suicide is a cruel act of revenge on her mother for all the ways in which Thelma has failed her.  Ms van Doornum’s relentless but eerie calm – with only occasional outbursts revealing the banked fires of aggression and resentment beneath – is beautifully maintained.  At one point, as if weary of her Thelma’s pleading, she spits out, ‘I should’ve left a note!’  And Thelma spits back, ‘Yes, you should’ve!’  But there’s no way Jessie would have left a note.  Torturing Mama like this is so much more satisfying. 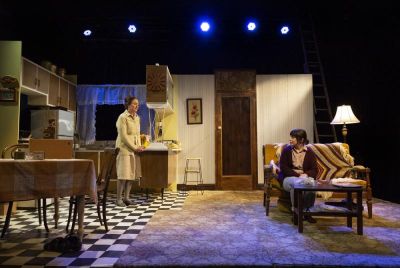 Ms van Doornum’s performance is a near perfect contrast and foil to that of Ms Lee who, with restless, agitated movements, segues between incredulity, panic, her reluctant awareness of her own unhappy life, her anger and her begging – not just for Jessie not to kill herself but for Jessie’s forgiveness.

‘night, Mother’ is hardly a cheerful piece, but it is a gripping one, delivered by these two fine actors in detailed, considered performances that build inexorably.  Clearly, director Briony Dunn and her cast have explored and pinned down every nuance of the text.  The tension is maintained, on one level, by the question ‘will Jessie really do it?’  But the psychologically acute writing gradually reveals the past of these two women reduced to nothing but each other – and now one of them, in a final assertion, intends to remove herself from that co-dependent arrangement.