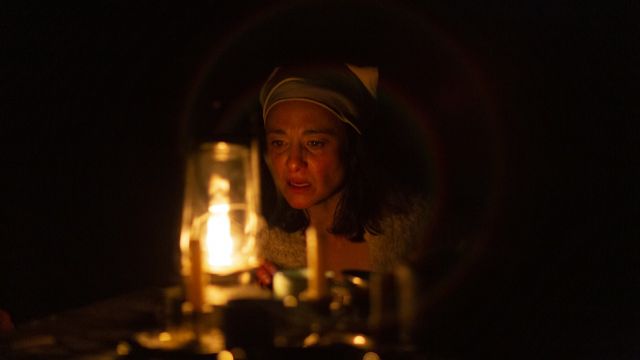 Ella Hickson’s Oil is a sprawling saga stretching from 1889 and on into our future.  In scene one, an American oil man (Darcy Brown) quips to a dirt-poor, candle-lit farming family, as he introduces them to the wonders of kerosene, ‘The Stone Age didn’t end because they ran out of stones.’

But the Oil Age will end when we run out of oil – and we’ll shiver in the cold again as these farmers shiver in the winter of 1889.  In each of five extended scenes, rocketing through time, oil is the catalyst – as a source of a heat and light, transforming people’s lives; as an essential commodity for the imperial powers, invading and carving up the Middle East; as a source of bloody dispute when the Middle East tries to take back what lies under their soil…  And into the future, when China has ‘won’ and a-so-confident-as-to-be-condescending Chinese salesperson (Jing-Xuan Chan) offers a cold fusion lamp made of minerals sourced from the Moon…

The scenes are linked (if not quite held together) by the figure of May (Daniela Farrinaci), who magically mutates through this history, each time a different, epoch-appropriate figure but essentially the same strong-willed, ruthless survivor – a rebellious farmer’s wife, a maid in Tehran, an oil company executive, a British politician making backstairs deals in Syria and finally, a cold and crooked old woman, all passion spent.  Daniela Farrinaci gives an astonishing performance and she is the centre of this panoramic epic. 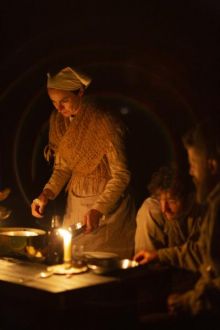 Ms Farrinaci is bolstered by a strong supporting cast.  In the opening scene, there’s May’s husband Joss (a solid Charlie Cousins) and his family – the brook-no-dissent matriarch Ma (Jennifer Vuletic), Thomas (Justin Hosking), Samuel (Mathew Whitty), Anne (Nicole Nabout) and Fanny (Jing-Xuan Chan) - all made miserable, bitter and violent by poverty, ignorance and darkness.  Nineteen years later, in 1908, the British are poking around in Persia for oil.  May inveigles herself – with daughter Amy (Hannah Fredericksen) in tow – into a job as a maid, flirting with an arrogant idiot of a British Army sergeant (pitch perfect performance from Mr Whitty).

Oil is the central thread that runs from beginning to end – a reminder of the underlying economic motive for wars and other societal shifts, but that central idea is often subsumed by playwright Ella Hickson’s other concern – which is the relationship of the various iterations of May and her various daughters called Amy.   Those sequences are powerfully and insightfully written – and performed with incisive intensity, but they dominate, they take over.  In the 1970 scene, for instance, May is the oil company executive, visited by a Libyan diplomat (Khisraw Jones-Shukoor), glowing with revolutionary power, who demands May sign away her company.  But the focus shifts to corrosive, bitter and chilling dialogue between mother and daughter.  May is hard as nails, the cynical realist; Amy is spikey but childish.  (Ms Fredericksen seems to glow throughout, all the same.)  If the intention is that mother’s attempted control of daughters is somehow analogous to attempts to control a valuable resource (until it is all gone), the link is tenuous and scarcely illuminating.

The production is mounted in Red Stitch’s new second venue, a cavernous church hall in Prahran.  The space is adaptable but for this production director Ella Caldwell has opted for a narrow transverse stage with raked seating either side.  The front rows are practically treading on the actors’ toes – and vice versa - but this wonderful cast never wavers.  For scene one, however, Ms Caldwell (and Greg Clarke, set designer, and lighting designer Clare Springett) follows what is apparently precedent and the first scene plays entirely by unenhanced candlelight – until the kerosene lamp brightens proceedings.  This provides beautiful 19th century images but we are anxious (perhaps we are meant to be) about Mr Cousins chopping wood in total darkness and it takes some time for us to work out who is who among the shadowy figures. 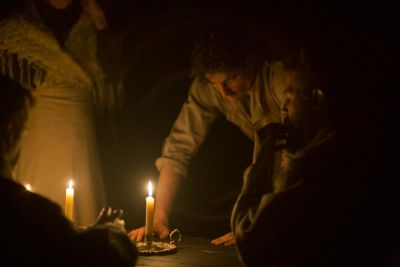 The point, of course, is the contrast made by the kerosene lamp.  But the excessive naturalism rather traps the production into more of the same without the resources to suggest such a level of reality.  Thus, preparations for a banquet in Tehran look very ad hoc and shabby and the cheaply furnished Hampstead home of May the oil company executive is just not credible.  With the latter, the set becomes a distraction from this excellent (if divided) scene.  The bare stage that is the Syrian desert, where deluded do-gooder Amy is roundly told off by Syrian Aminah (a towering, biting performance from Ms Nabout here) is far more convincing.  One suspects tough choices were made due to budget constraints: this production just isn’t and couldn’t be as well resourced as that at the Almeida in London.

Oil is enormously ambitious, as is Red Stitch for mounting it.  It has the largest cast on a Red Stitch stage that I can remember.  But what some will call ‘ambitious’, others might call unfocussed and rather too long.  The playwright’s commendable reach for something of epic proportions perhaps means she attempts too much by including too much.  Nevertheless, while the two central strands may not mesh, each is clear and strong – if bleak.  And we cannot at any stage take our eyes off Daniela Farrinaci’s May and Hannah Fredericksen’s Amy: they take us with them across aeons and all their struggling personas.