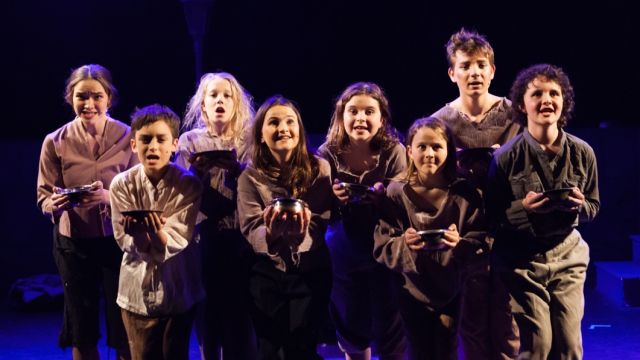 One of the most exciting aspects of Laughing Horse’s Oliver!, apart from some stellar performances, was the amount of new faces brought to the stage. Director Adam Salathiel, Musical Director Liam House and Choreographer Zoe Jay have created a satisfying production that beautifully blends veteran performers with fresh-faced emerging performers.

The show opens with “Food Glorious Food”, performed earnestly by twenty young “orphans”, from seven years of age, over a dozen of whom are making their community theatre debuts. These youngsters continue to pop up throughout the show, including in some delightful initiatives (the acrobat buskers are wonderful) and the nurturing of these little actors is very evident.

Duncan Ferguson, a beautifully voiced Oliver, is just one of many of the cast in his first theatrical role, and plays the young role with feeling and understanding. Kelsey Morandin steps into her first lead role, as the Artful Dodger, and works well to convince us that she is a confident and swaggering young man. Mark Thompson is excellent as Fagin, and makes a strangely sympathetic villain, in a wonderfully physicalised portrayal. Bill Sykes is far less sympathetic but also very strongly performed, as Peter ‘Pear’ Carr returns to the role after ten years - a disturbingly natural realisation of this horrible man.

This musical is dotted with some wonderful characters, and it is impossible to mention them all, although all were performed with gusto. Some standouts included Sophie Byrnes very sweet Bet, Neil Young’s very frustrated Mr Bumble, Edan Frazer’s bullying Noah Claypole, Corban Fenton’s earnest Charlie Bates and Kelly Salathiel’s lovely Mrs Bedwin.

Performed on a single set, well designed by Adam Salathiel and Peter ‘Pear’ Carr, the lighting design (also Adam Salathiel) helps to designate locations. The set shows the 12 piece band, placed at the rear of the stage, and the sound is well balanced by Liam House, and operator Alex Coutts-Smith. Oliver! is a true classic of musical that is always worth a revisit. This rendition has some amazing leading performances and a joy of performing that permeates the whole experience.