One is warm in winter, the Other has a better view 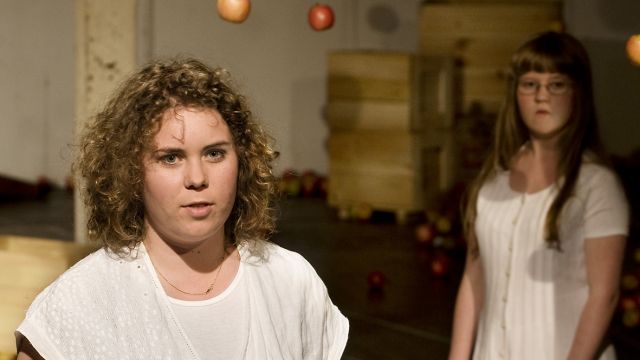 There was a moment, very early on in this Platform Youth Theatre production, where I became hypnotised by what was unfolding. The delightful Kayla Roberts (The Unknown) stands completely still, staring – full of wonderful curiousity – at Andrea Jenkins (The Bitter) as Ms Jenkins literally hurled a firey and defiant monologue about her painful relationship with a higher authority straight to the audience from about three feet away. There was no earnest, self-concsious, well-meaning 'youth-on-stage-instead-of-on-the-streets' worthiness at play here. This was Theatre: and quite possibly an example of the best Youth Theatre I have ever seen.

An epic allegory on Faith, rich in contemplation, ideas and characterisation, One is warm in winter, the Other has a better view boasted a luxury of riches, and made ample use of each and every single one of them.

Ms Beer's brilliant set was not only startling in its conceptual simplicity, but it managed to serve the demanding production at every point: from the early clarity of its quintessential reference to The Bible's 'Eve' to its later almost hallucinatory transformation into the vast and deadly 'Poisonous Point' – traversed by the ensemble in a journey of biblical proportions.

Ms Dullard's direction was, initially, applied in beautifully broad brush-strokes and, perhaps most importantly in youth theatre, the ensemble were delivered to the stage with great confidence, knowledge and respect – ripe, and of their time and place. This is no mean feat within an ensemble of some 20 young actors with varying degrees of experience on stage, but Ms Dullard kept the work honest, engaging, truthful and connected. She was rewarded by magical and commited performances from every single member of the ensemble – which, more often than not, was incredibly powerful and yes, hypnotic.

Mr Cass's outstanding script was burning with symbolism, ambition, insight, wit and observation – but where it was its most powerful was in its stunning use of vocabulary – and in not being even remotely shy of demanding punishing changes in rhythm, tone, structure and breadth of vision. Tricky counterpoints, juxtapositions and metaphors – in the hands of a lesser talent – would have risked falling into ponderous, laboured conceit; but Mr Cass's obvious belief in the strength and purpose of this work (and his role in it) resulted in a beautifully complex script that completely provided, and then accounted for, every possibility – exploring, at times, a language of its very own.

It is impossible to single-out individual performances within this ensemble; such was the strength of unity in permission that signals a fine ensemble at work. What was clear was just how much these young actors love the Theatre and the opportunity to tell their stories. On this very special night, the Theatre loved them back.

I cannot wait to see what they do next.

Pictured: Clare O'Shannessy (The Woman) and Kayla Roberts (The Unknown) in One is warm in winter, the Other has a better view. Photographed by Sophie Neate.