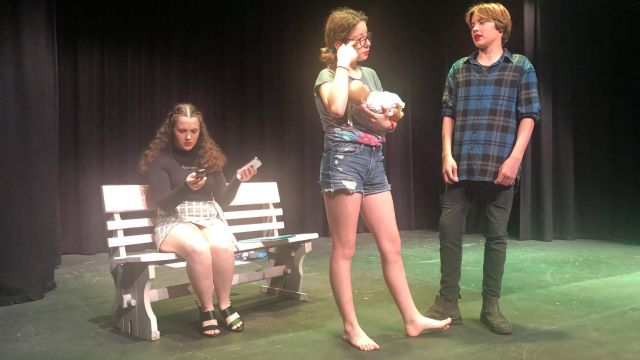 Outback Angels, a really likeable little show by local author Yvette Wall, was first performed by Stirling Players in 2019, followed by a well-received performance at Youth Fest. It returns, with its original teenage cast, presented by Off the Wall Productions for Fringe World. It is good to see it shared with a larger and wider audience.

On an outback station, somewhere nearish Meekatharra, Lainey and Pete are being looked after by their rather reluctant new au pair. British Annabelle has been despatched to Australia by her father, and it seems unlikely she will cope with the lack of a reliable internet connection, let alone any greater responsibilities.

Directed by Scarlett Greenock without bells and whistles, the focus, as it should be, is on the three young performers and their interactions. Lena McLeod is very convincing as the youngest of the trio, Lainey, a nine year old who has sensory and communications difficulties and difficulty coping with quite a few situations. Fynn Synnot portrays her older brother Pete nicely, conveying his fraternal responsibilities well. He has a slightly unusual delivery - I am not sure if it is Flynn’s natural intonation or not - but it works well for this country kid, who in some ways is older than his years. Kate Sisley is initially appropriately irritating as “almost Insta-famous”, spoilt and privileged Annabelle. She charts a lovely development throughout the show and we become quite fond of all three characters.

A very short show, which packs a great deal into its half hour. Good solid work from a young director and cast.