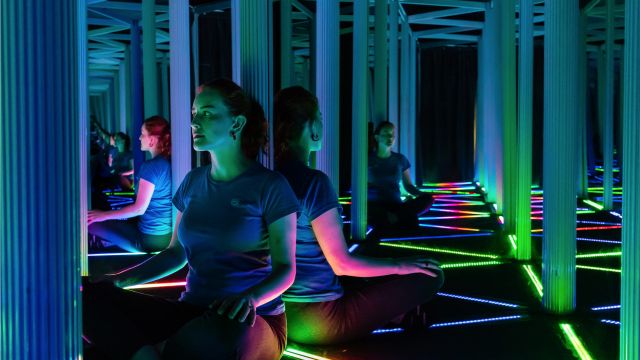 This dazzling show is about time travel – and other things.  If time travel makes you think of the Terminator and Back to the Future movies, Rosy Carrick makes reference to both; they’re an inspiration for her.  But only one aspect or one persona of Rosy Carrick is a pop culture nerd; she’s also a PhD who did her thesis on Russian revolutionary poet Vladimir Mayakovsky – and has edited and co-translated a selection of his poetry, Volodya (2015) and his epic poem Vladimir Ilyich Lenin (2017) and published a collection of her own verse, Chokey (2018).  But it was her fascination – or obsession – with Mayakovsky that began another obsession, that is, with time travel because, as she tells it, believe it or not, it was in Moscow that she was handed a letter written to her by her future self, who is now trapped in the past…

And so Rosy tries to learn about quantum physics and relativity in pursuit of building a time machine… so as to go back herself to her future self in 1928 and rescue Mayakovsky from committing suicide… Anyway, there’s all that, but ‘time travel’ here is an elastic term.  For instance, we write letters to our future selves, don’t we?  Her example is of the little girl Rosy writing a reminder note to herself (a different self on a new day) about that very next day: ‘Remember PE kit.  Cancel Free Trial.  Call Mum.’  Even sleeping, says Ms Carrick, is ‘a short cryonic freezing’.  (And another example, not from this show but from her poem Chokey, about a trainspotter, ‘behind his glasses/rail roadiana nostalgia flashed/like it was now, and he was juggling yesterday…’)  At one point Ms Carrick takes a pack of playing cards and asks us to think of the top card as her now – 36-year-old PhD, poet and performer, and single mother – and the cards beneath as her past selves, all the way down to the child that promised to look after the future selves.  What if we could communicate with our previous selves and ‘save’ them from bad decisions? 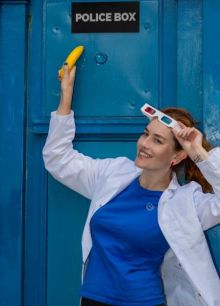 So, ‘time travel’ here means something – or some things - far more illuminating than what happens in time travel movies – just physically appearing in some other time – past or… future – which she acknowledges, with a hope-dashing reference to Stephen Hawking, really is impossible.  And yet… Are you keeping up?  It’s that kind of show – darting about, yoking wildly disparate ideas, insights and confessions together, racing into tangents that somehow connect – and if you lose focus for a second you may miss a connection – making a consistently fascinating, charming, amusing and provocative show for all its sixty minutes.  Not just Mayakovsky and those movies, but also a David Bowie lyric, the Large Hadron Collider (the only thing with enough speed to approach time travel), Bill & Ted’s Excellent Adventure and an on-line scientist helper she never meets called ‘Year Solver’.

Directed by Katie Bonna, this autobiography-meets-sci-fi polished performance art piece (it’s been in Brighton and at the Edinburgh Fringe and won awards) is illustrated by a clever, teasing video montage and the smooth use of a table full of props – books, including her own, portrait photographs, playing cards, a slinky (metaphor for a worm hole) and an Arnie Schwarzenegger backpack containing some necessary time travel equipment.  The integration of video and the props is so precisely timed that we see Ms Carrick is a lot more than an egghead clever clogs.

Passionate Machineis another show in which a woman takes personal experience – not just of a Russian poet, but also of childhood memories, failures, academe, traumas, motherhood, being trolled and surviving (inspired by the theme from Rocky) – and turned all that into art.  This is not your usual Fringe show.  You won’t be rolling in the aisles, but you will laugh with surprise and pleasure at the unexpected and be held, fascinated by where she’ll go next and whether she will bring it all together.