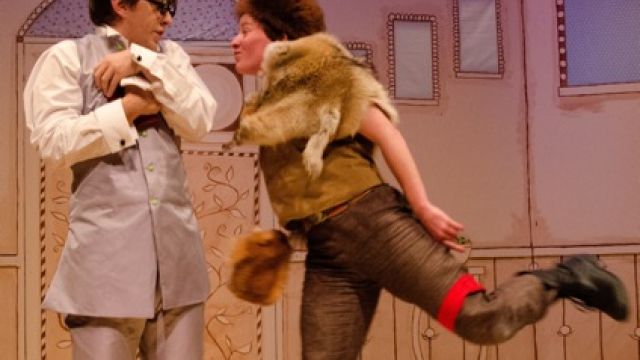 While many of us may know “The Princess and the Pea” by Hans Christian Andersen, do not assume that this is a traditional telling of that story. Rather, it is a clever narrative with the Pea (a fabulous green talking pea puppet wearing spectacles) telling how he was involved in a daring clash and helped the young prince to find a princess (actually a princess of wolves and thieves, decked in fur and with hilarious wolf-like actions).

The actors, Cathy Petocz (Princess Gwendolyn) and Josh Wiseman (Prince Gregor), were delightfully funny as well as alert to the reactions of the audience, which on this occasion was a full house of youngsters sitting on cushions on the same level as the stage.

The audience’s attention was caught by clever shadow puppets using “windows” of voile in the set. The designer, Gillian Schwab, has done a very good job. The set is placed upon the stage of Theatre 1 at the Street Theatre, and around the walls of black drapes are set many vegetables from history, celebrated in portrait, and in jars, in the manner of a museum. More traditional flats at the back are cleverly painted and accommodate the puppeteering requirements. Mention must be made of the good lighting and audio design (Seth Edwards-Ellis), which truly add to the show.

Miss Seven, who attended the play with me, announced her verdict as we left: “That was lots of fun and they are very clever!”