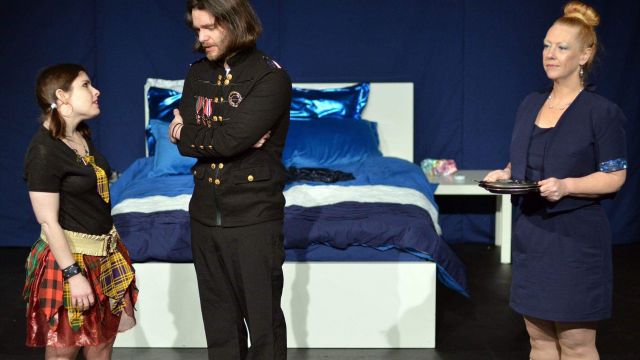 Pilgrim – ‘a person who makes a journey, often a long and difficult one, to a special place for religious reasons’. This is the accepted meaning of the word but it can also mean a wanderer or wayfarer. In the case of the play Pilgrims, presented by the Oily Rag Theatre Company, it refers to a soldier and a teenager quarantined together in a cabin on a spaceship travelling to a newly discovered planet, seemingly to begin new lives.

You would be forgiven for thinking this might be the subject for a sexually oriented scenario. While there are sexual overtones, the play centres on two very different people having to face past traumas, the roles forced upon them and wanting to make a new start.

A Science Fiction drama by Claire Kiechel, the play leads us through the 100 days of travel, as barriers between The Girl (Shannon Gray) and The Soldier (Jabez Retallick) are broken down, with their only contact from the outside world being Jasmine (Kyla Booth) a B-series robot, their steward for the voyage.

The setting is a futuristic hotel-like cabin in blue and white, with sliding door sound effects. The attention in the detail of the trimmings is commendable and given the confines of the Bakehouse Theatre has a realistic feel, thanks to the production design by Shannon Norfolk and lighting design by Kat Kleeman.

Kristin Telfer’s direction is tight, uses the space well and gives us three very different characters that take us on a journey, ending with the hope that making a new start can heal old wounds. Shannon Gray’s Girl is irritatingly upbeat at the start of the play, but we soon realise that this façade covers a past of non-fulfilment. Gray plays with an amazing amount of energy which creates a multi-level character, providing not only many of the comic moments of the play but also drawing us back to the serious themes.

Jabez Retallick’s Soldier is intense, troubled and isolated. His avoidance of social contact is slowly broken down during the mind games played with his fellow traveller. He is brooding, gradually revealing the terrible secret from his past that has left his life shattered.

Kyla Booth’s Jasmine the B-series robot is unflinching saccharine and like the other two characters, has secrets that gradually reveal themselves over the 100 days during which she is the only communication with the rest of the ship. We are left wondering whether she is ever telling the truth, or hiding it.

As interesting as this whole premise sounds there were a number of elements that left this reviewer puzzled and prevented me from fully connecting with the characters in the story.

There is no clue to the blue light on the end of one of Jasmine’s fingers, or the flashing light in the Girl’s mouth in what may have been a dream sequence (I couldn’t tell). The dream sequences themselves did not further the story for me and because it takes place over a number of days, I found the play fragmented, resulting in the frustration of not being able to explore a theme fully in such short scenes.

My ability to immense myself fully in the play was also not aided by a cold theatre apparently not heated.

All in all, while a lot of effort and talent combine to explore some very important themes, Pilgrims is at times fascinating, but at other times confusing and hard to relate to.