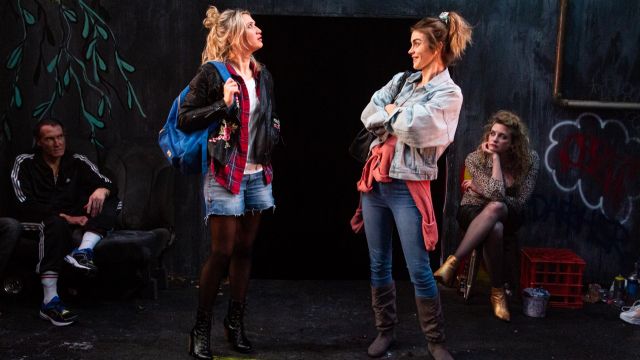 Pomona goes deep into a nether world that may or may not be real (and you’re never quite sure) but it is nightmarish enough.  A world of pain from which there seems to be no escape.  A world which young, naïve Ollie (Mona Mina Leon) tentatively enters, searching for her missing twin sister.  Slimy, reptilian Zeppo (a rigorously maintained persona by Dion Mills) warns her not to get ‘involved’.  He owns most the property around there, but he asks no questions, applies no standards; he will not get involved.  The concept of getting involved recurs over and over.  Do not get involved.  You get involved, you’re in big, big trouble.

Zeppo is right – demonstrated as we meet more denizens of this foetid underworld.  There are two security guards, Moe (a menacing Arthur Angel), a man with severe anger management problems, and simple-minded Charlie (Nicholas Denton) who although disturbing is also strangely touching – and the play almost becomes his story.  We first meet them injuring each other as demanded by Moe, with punches, kicks and stabbing.  Why?  Keep watching.  Later – or actually before - Charlie persuades Keaton (an enigmatic Artemis Ioannides) to play his RPG (Role Playing Game) called Cthulhu with him – and the dice they throw becomes another motif in this place where luck won’t help.  Later (or is it before?) Keaton is her own avatar and a nasty piece of work that is.  Big tough Gale (a scary Julia Grace) is the violent, bullying but frightened madam of the underground brothel; she lords it over Fay (a poignant, vulnerable but brave Jessica Clarke) one of the working girls whose encounters with clients may or may not be filmed. 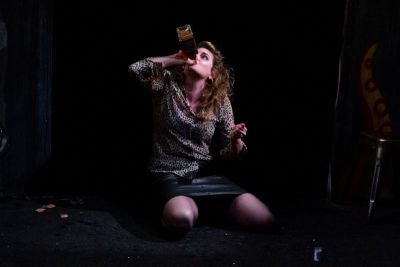 But this play, running an uninterrupted 100 minutes – and never letting up – is gripping.  It takes you by the throat and doesn’t let go.  The characters are complex and intriguing – and played by a faultless cast – with dialogue that is consistently revealing and entertaining (even while you may gasp or wince at what’s said).  Director Gary Abrahams shows the surest of sure hands in the relentless pace and his use of the claustrophobic, filthy, graffiti-smeared space.  The impressively imagined design is by Jonathan Hindmarsh and the murky or blinding light is the work of Lisa Mibus.  Characters not in a scene remain on stage, not just waiting but actively, avidly watching the action.  The cast sustain this element throughout, creating a sense of voyeuristic cruelty and nowhere to hide. 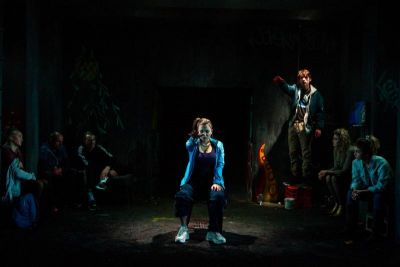 But – as hinted above – Pomona is also what might be called a ‘puzzle play’.  Mr McDowell employs a non-linear structure – although nothing so simple as starting at the end and going through to the start.  No, he starts at the start, then jumps (I think) to near the end, but doubles back to the middle…  And so, given the characters and the car smash nature (you can’t look away) of the events, you are held, concentrated, leaning forward to solve the puzzle, to see where each bit fits.  If by the end not every bit quite fits, it doesn’t matter.  It’s been a thrilling ride.

Some people seem to be taking this play – gripping, superbly acted, designed and lit as it is – way too seriously as if it is some profound comment on contemporary life and those things that we on the surface prefer to ignore.  True, there is nothing here that doesn’t happen, nothing that doesn’t exist in the real world.  But when Zeppo claims to Ollie that ‘Everything bad is real’, we might suspect that Mr McDowell is deliberately and with malicious glee – and a sense of fun - constructing world of piled up horrors and dangerous or pathetic human beings for our entertainment and doing that with great theatrical skill.