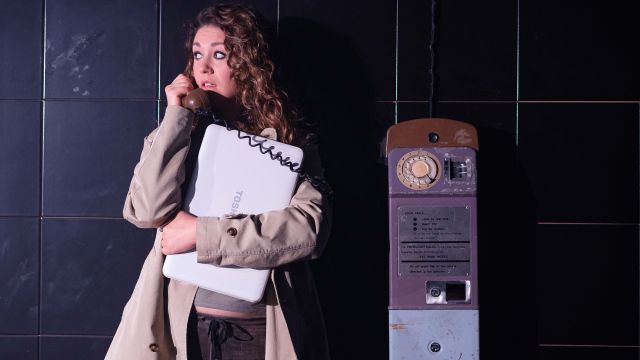 Alistair McDowall, the young British author of this over-rich pudding of a play, has his seven characters in search of Pomona, an urban wasteland, a concrete island buried somewhere in the heart of Manchester, England. Not that there’s the slightest suggestion of a Mancunian accent among the seven actors at the Kings Cross Theatre, which is absolutely jammed for this first night occasion.

To begin with we get Zeppo (Dorje Swallow) as he gives a hurried summary of Raiders of the Lost Ark while consuming a box of Chicken McNuggets. The audience is silent as he rushes on, revealing that he owns the city. A bagful of Rubik’s Cubes are passed to a creature with several octopus-like snouts: he/she solves them all in a flash.

Next we meet Charlie (Kevin Batliwala) who works as a security guard at Pomona, a job that requires him to ask no questions as unmarked trucks come and go. Charlie has invented a game called ‘Cthulhu Awakens’ that he plays all day long: it whiles away the time, before he gets into a great fist fight with his friend Moe (James Smithers). 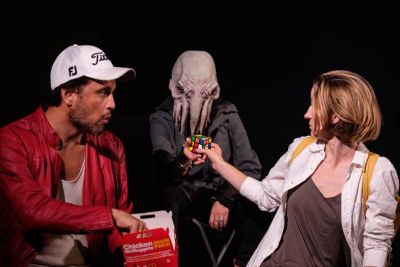 Not to forget the women - Ollie (Amanda McGregor) is searching for her twin sister and takes a job in a brothel run by the troubled Fay (Lauren Richardson). A hotly angry Gale (Monica Sayers) employs Charlie and Moe to rub someone out, while Keaton (Jane Angharad) is in there helping the show go on for an interval-less 1 hour and 45 minutes. (Note that the characters all have names taken from the cinema.)

All this time there is an effects track, pinpoint lighting and enough smoke and mist to cover the scenes as they descend into utter darkness. There’s no doubting that this is a brilliant production by Anthony Skuse, with Set Design by Skuse and James Smithers, excellent Lighting Design by Veronique Benett and superb Sound Design by Nate Edmondson.

I can’t go along with the playwright’s idea that all life is a meaningless loop of pain and suffering, but his play is undeniably gripping.