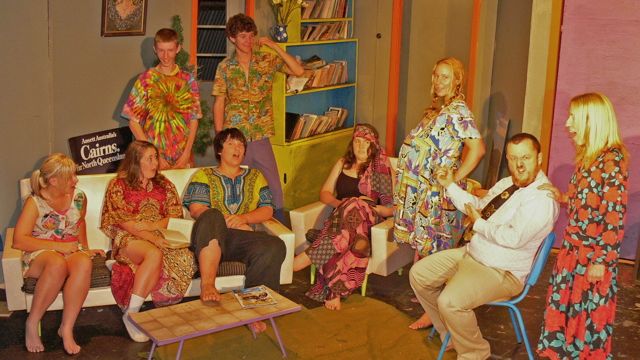 The Atherton Performing Arts’ thirtieth birthday bash production is a revival of Poor Men’s Riches, a locally written comedy by Marie Cohen.
On a well-constructed set the action is fast and furious. Slamming doors, revving motorbikes, loud music and yapping dogs provide the background noises driving Gordon and Frances Armstrong nuts. But this cacophony of noise is not caused by the neighbours; it is caused by their own children. When the disturbance disrupts their sex life, mum and dad pack their bags and head to the nearest motel.
Ray Broomhall as dad (Gordon) and Janet Duffus as mum (Frances) play the beleaguered parents to perfection. Ray captures the frustrated dad perfectly as he tries to balance the accounts and cope with a myriad of family-related problems, while Janet does a great job as mum, trying to keep it all together while retaining her sanity.
Genevieve Kruyssen as Rita, Sarah Broomhall as Joan, Tom O’Connor as Brian, Jimmy Sinapius as Ken and Natalie Day as Joan all give strong performances as the children, while Gillian Charlesworth plays a good cameo role as the very pregnant Jan.
Backed by some classical hits from the 70s, Poor Men’s Riches is even richer the second time around as Jacqui Stephens directs the mayhem superbly in what is a fitting birthday production.
Ken Cotterill