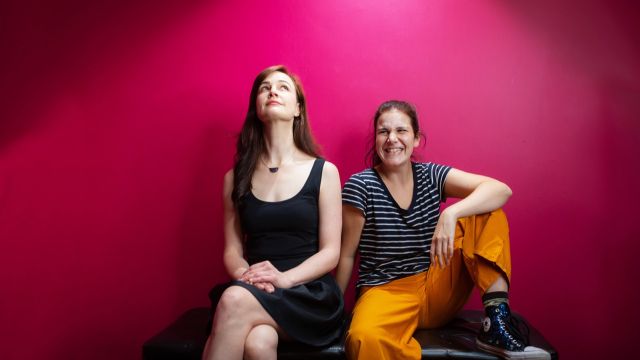 Pretence is a satirical one-act comedy that explores the dynamics between two actors, at loggerheads over the leading role in an amateur theatre production. The multi-award winning play, written and performed by Hayley Lawson-Smith and presented by Dramatic Pause Theatre, is currently playing at the Butterfly Club.

The play opens with frumpy Maggie (Hayley Lawson-Smith), an aspiring actor nervously anticipating her call back audition, when she hears an unexpected knock at the back stage door, and discovers, much to her dismay, that Cleopatra (Aimee Sanderson), a pretentious wanna-be is up for the same role. Tensions fly and competition is rife - these to marvelous actors deliver punchy paradoxical dialogue that addresses the world of amateur theatre with a delightful energetic zeal.

This small, low-key production, with perfectly timed comical banter, also pokes fun at the world of actor training and the egomaniacs that hold court. There’s precocious anxiety and belittling tactics from Lawson-Smith and Sanderson – Maggie is grounded and down to earth, while Cleopatra is proud, loud and very middle class. An unexpected twist breaks the frenzy, shifts the pace and delivers an unforeseen ending.

An underhanded pathos is displayed by Lawson-Smith; extending beyond sharp and clever, she displays lots of scope and depth.