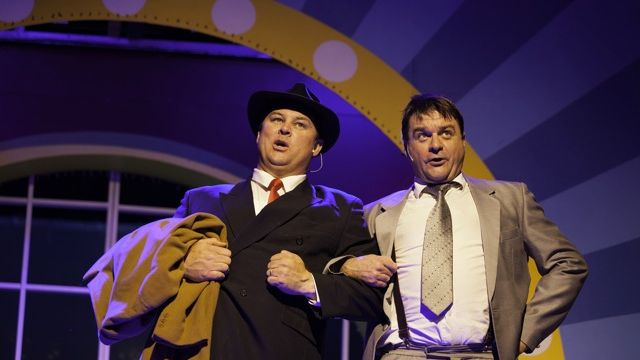 The Producers at Playlovers is one of the most outstanding community theatre productions of the year to date.

The set, designed by Wayne Herring, is stunning. Designed over two levels, it is bright and effective with some clever surprises and direction has used the set to its best advantage. Set changes are so slick that you could be fooled into believing that they are using travellers.

This is a show that uses costume designer Terry McAuley’s talents to the full. Featuring more ostrich feathers than the African continent, the costumes, especially for the showgirls and the ‘show within the show’ production numbers, are fun, beautifully created and exciting. Seventeen-year-old Samantha Gaunt, in her first leading role, was an ideal choice as Ulla. Leggy, blonde, sexy yet naïve, she lit up the stage.

Rounding out the principal cast was Ted Simpson as eccentric Nazi sympathizer Franz. An obvious audience favourite, he delivered a delightful, beautifully measured performance, especially when interacting with his beautifully constructed pigeons. The gentlemen of the ensemble were particularly strong, with every member shining in cameo appearances. The women, while not as strong vocally as the men, moved beautifully and created lovely characters. Particularly memorable were Clare Thomson and Elise Giaimo’s usherettes who were vocally striking and personable.

A sixteen-piece music ensemble played well and sound was nicely balanced in this notoriously tricky venue.

Very much a highlight of the theatre year, while not perfect, my money is on this show to do very well at the 2013 Robert Finley Awards.