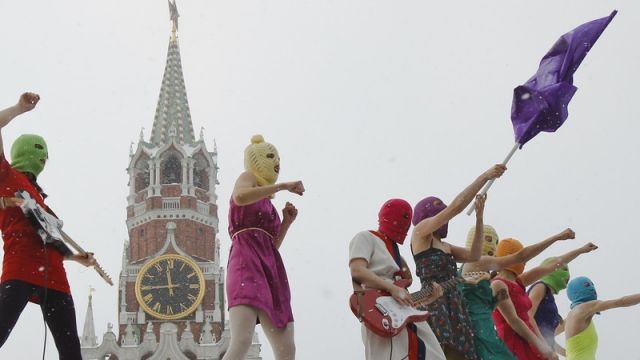 The Russian punk-collective delivers an angry, defiant and powerful message to the enthusiastic crowd in the comfortable surroundings of the University of Adelaide, in stark contrast to their reception in their own country.

The five performers shout, play brass and rap their story to the backdrop of video footage of their political performances in Moscow, and the subsequent trial and imprisonment. The English surtitles are stirring enough, but the passion in their voices, percussion, trumpet and saxophone resonates with your core.

The collective tells us who they were, who they are now – that they protested about the undemocratic installation of Putin, and his unholy endorsement from the Orthodox church, supposedly separated from the state by the country’s constitution. Now, they’re protesting about the unfair arrests, trials and imprisonment of those who dare to speak out against the regime – and this is as much about the injustices in our frame of reference as theirs.

The songs and poetry were rapturously applauded by the adoring crowd and there was no denying the power of their messages. If the state-sponsored seat of learning was an incongruous venue for their story, the love and pride for their country was obvious, together with their desire for it to be restored as a home for all its people, not just the patriarchs.

There’s a rich vein of artistic talent beneath the loudness of their voice – there is context and intent, relevance and relationships between the different forms of expression, but these are words, music, costume and video that have a much higher cost than a Fringe ticket.