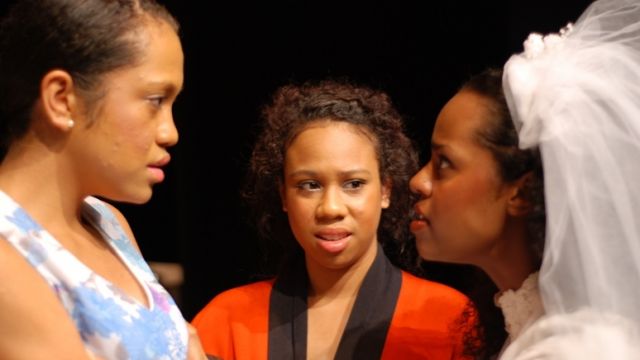 Following a popular revival of last year’s sell-out season of He Died with a Felafel in his Hand, the official opener of Arts Theatre’s 2010 season is Louis Nowra’s Radiance.
Jo Pierce, her splendid indigenous cast of three and the production team deserve high praise for a finely-tuned, engaging production.
Three half-sisters, who lost touch with each other over the years, return to their North Queensland home for their mother’s cremation. Nowra handles deftly the awkwardness of reclaiming their relationship, a litany of embarrassing and humorous moments.
The remarkable cast − Georgia McBride-Levi (Mae), Josifini Hawkins (Cressy) and Louvel Yapali-Purcival (Nona) − create clearly defined characters beyond their age and carry the audience with them through the highs and lows of the situations.
I was especially impressed by designer Richard Hunt’s simple seaside shack (Act I) and the full screen seascape-video (Act II) of mudflats and the near-shore island where they grew up as youngsters.
That second act was especially poignant – the sisters never quite reached the island in their quest to place their mother’s ashes there. That island evoked the sort of peace they all aspired to.
By then all the home truths had been revealed. That they finally decided to destroy painful memories of their past was cathartic but potentially destructive to all their futures.
Amid the laughter and the pathos is good entertainment, but this is not a play you will forget quickly.
Radiance is a hit!
Jay McKee