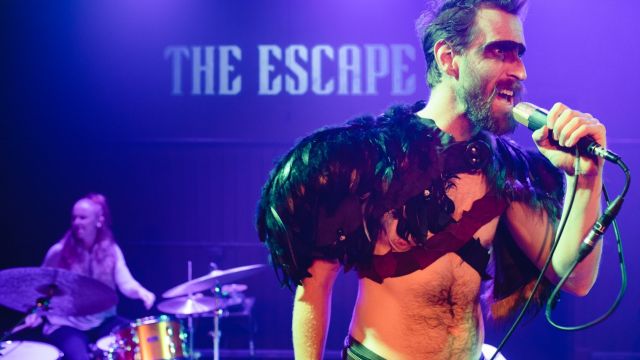 Ragnarøkkr is a story of Armageddon, merged with a Nordic rock concert. Wild, crazy and very, very loud, this traditional Norse story of Ragnarök is told in a new unique way.

Writer/creator St John Crowcher cuts a striking figure as Loki, bare chested and winged as he tells and sings about the downfall of the gods. Music collaborator Joe Lui plays guitar and plays Loki’s son Jormungandr, with Grace May Smith on drums as Fenrir. The lighting - by Chris Donnelly - is rock concert like and highly atmospheric.

I felt at times that the narrative could have been more explicit, but the music is impressive, and the opening night audience were very absorbed. This cross between Norse mythology story time and Norway’s next years’ Eurovision entry certainly captures attention.

While not for everyone, lovers of rock and mythology may enjoy this new, well written show. Wear your ear plugs (supplied) and rock with Ragnarøkkr.