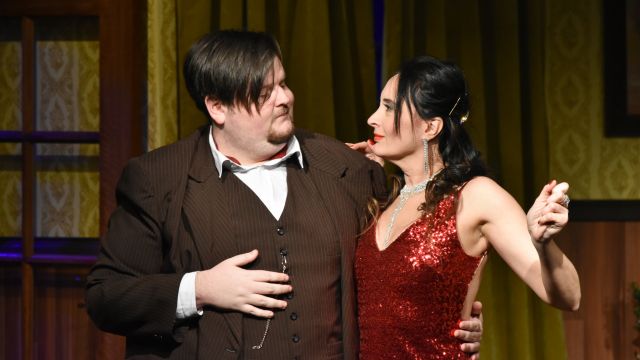 Written in the early 1960s, The Real Inspector Hound satirises the theatre critics of the time – of which he was one – and the melodramatics of Agatha Christie-style murder mysteries. Mercifully, the verbose critics of the post war newspapers that Stoppard lampooned are long gone, and though some critical jargon and cliché still survives, I’ll try hard to avoid it.

The play-within-a-play that is The Real Inspector Hound is typical Stoppard. The plays and the characters interact in a plot that blends parody, satire and absurdism with a little bit of realism and melodrama. Getting the complexities of the play right is a challenge for the director and the cast; understanding them is a challenge for the audience.

The play involves two theatre critics in discussion during the course of a one act play. Moon (Melanie Robinson) is a ‘second string’ critic who is concerned about her missing superior, Higgs. Birdfoot (Myles Burgun) is an over confident blusterer who fancies himself – and many of the female actors he reviews. Their discussion is interspersed with extracts from the convoluted critiques they are writing. The play they are watching is a typical murder mystery. It is set, of course, in a lonely manor on the moors on a foggy night with a murderer on the loose. The lady of the manor, Cynthia Muldoon (Claudia Bedford) is still carrying a torch for her husband, Albert, who disappeared without trace ten years ago. That, however, doesn’t stop her flirting with her house guest Simon Gascoyne (Luke Shepherd). Gascoyne has also had a fling with another guest, Felicity Cunningham (Mary Coustas), who is, understandably, somewhat miffed with both of them. Another resident of the house is Albert’s suspicious-looking half-brother Magnus (Aiden McKenzie) who is confined to a wheelchair.

But that’s not all! There’s the Cockney housekeeper, Mrs Drudge (Christine Rule), who keeps the audience up to time with snippets of commentary – and her ‘handling’ of the intrusive Gascoyne!  There’s a dead body that is summarily ignored by everyone … except those members of the audience in the front few rows who see a foot or hand move every now and then. And then there’s the snow-shoe-encumbered Inspector Hound (Tracey Okeby Lucan) who bustles onto the scene when Gascoyne is unexpectedly shot. When, after interval, Birdfoot answers a phone that rings on the set and morphs into Gascoyne, the plots thicken like the fog outside and … well, to say anymore would reveal too much of Stoppard’s quirky denouement.

Alan Cunningham and a veritable army of ‘construction workers’ have created a manor house fit for any drawing room drama, complete with French windows that allow in the fog that appears on Mrs Drudge’s command! Wal Moore and Tracey Okeby-Lucan have provided the lighting, radio announcements and sound effects that set the atmosphere – including the noise of Magnus navigating his wheelchair down the off-stage staircase.

Similarly, director Isaac Owen has had to navigate the tricky intricacies of this play. Finding the balance between realism and melodrama, and sustaining the pace required by satire, is not easy. Overplaying the melodrama for comic effect in some scenes has unfortunately affected the pace of this production – and the satirical subtlety of Stoppard’s clever writing.