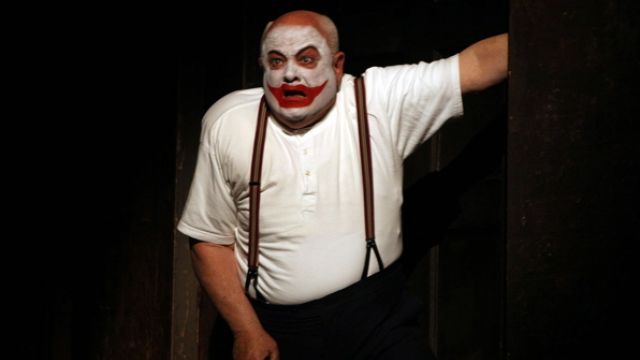 This was a very good and sumptuous production of Verdi’s masterpiece. Originally directed by Elijah Moshinsky for Opera Australia in 1991, it was restaged for Opera Queensland by Cathy Dadd. The ever-reliable John Bolton Wood sang the title role and I have rarely heard him sing better – robust, emotional, sympathetic, and finally heart-wrenching at the finale. It was a grand performance of a grand part. Emma Matthews, a principal with Opera Australia, was making her first appearance with Opera Queensland in the role of Gilda. Vocally she was a match for Wood, and did some solid work, but one never felt the innocence of the character. Steven Harrison, another first-timer with the company, was a fine Duke of Mantua, and David Parkin a brutally menacing Sparafucile. Winner of Opperatunity Oz, Parkin proved with his performance he has a more than promising career ahead of him. Moshinsky’s concept was to reset the piece in the Mafioso milieu of Italy in the late 50s. Hence the male chorus wore sunglasses, they all danced the Twist, and smoked more cigarettes than an episode of Mad Men. It gave designer Michael Yeargan a colorful canvas to work with, resulting in a spectacular revolving set, but the 50s theme didn’t always serve the libretto well. However, conductor Giovanni Reggioli brought his vast international experience to bear on the Queensland Orchestra who played perfectly under his baton.
Peter Pinne