The Rise and Disguise of Elizabeth R There has been so much real life drama swirling around the Royal Family this year that my first thought about this production was that Gerry Connolly wouldn’t know what material to leave out. Indeed, when I had the good fortune to sit next to him earlier this year, at another production, he quipped that he had a truck load of material to sort through.

However, much to my surprise, there was only a sparse reference to Harry and Meghan (nobody asks me how I’m doing) Markle and the sad plight of Prince Andrew in this production.

Rather than the experience being like an audience before Dame Edna, or the structured sketch format of the Wharf Revue, the creators of this work did something more ambitious. It was a play within a play, or to be more accurate, a musical within a musical.

The premise for the drama was the tension between an actor famous for his portrayal of one character and her looming demise. The question posed was - what will Gerry Connolly do once Prince Charles ascends the throne and becomes King George VII? 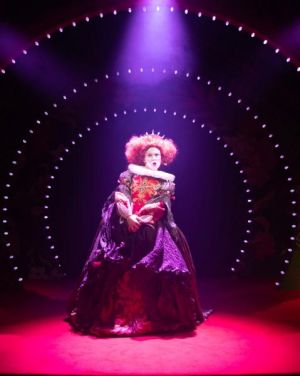 Going by the dazzling talent Gerry displayed, he won’t have trouble finding work. When we finally got to see the Queen on stage it was like a joyous rain (or perhaps reign) after a drought. Connolly’s mangling of the Queen’s Christmas messages was priceless.

Perhaps the highlight was his ensemble of impersonations of Australian Prime Ministers and their audiences with Her Royal Highness.

Did the musical treatment of the production work? Sometimes yes and sometimes no. Overall a little more Regina and a little less navel gazing would have been more pleasing.

Still there was much to enjoy. Playing a number of different characters in the musical within the musical were Rob Mallett and Laura Murphy. Their abundant talent kept the pace moving. In particular a duet between (the first) Queen Elizabeth and QEII was a scream.

The Hayes Theatre has a reputation for stunning looking sets and this one did not disappoint. Designer Jeremy Allen created a gorgeous James Bond movie opening like look for the stage and was given a moment to show off with the Queen in full regalia.

This production is likely to join the long list of Hayes Theatre Productions that are being seen around Australia.