THE ROLE MODEL by Bruce Hoogendoorn 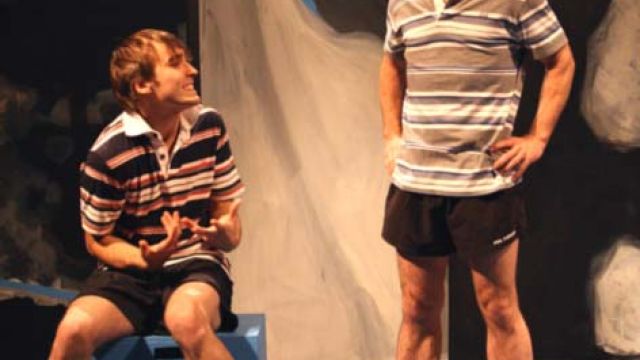 With codes of almost every discipline struggling with their public image, Bruce Hoogendoorn's The Role Model is a timely exploration of the punishing and very public dilemmas associated with a sporting hero's fall from grace.
Scott (the perfectly cast James Doolan) is an Olympic gold-medal winning swimming champion who has fallen from heroic heights as a result of a sexually-motivated indiscretion with his best mate's wife. His manager, Wanda (Denise Kuchmar) is determined to return her young charge to the lucrative public speaking circuit by hatching a plan (which will then be leaked to the media) to have him mentor young people dealing with depression.
This BOObook Theatre production of Hoogendoorn's sparkling script rarely manages to shake the restrictions of its lovingly staged reading from Director Sue Lindsay. The committed cast work, at times almost too hard, to lift their characters from the floor and into the rarified atmosphere of a truthful and connected ensemble that Hoogendoorn's big-hearted, feisty and unapologetic script demands.
As Adam, the young man emerging from a tortured childhood, William Ridley's performance is a revelation: a beautifully studied and nuanced performance of immense integrity, heart and skill. The dramatic highpoint, where Adam and Scott negotiate the real monetary value of Adam's cooperation with Scott and Wanda's plan, is a compelling collision of principle, need and agenda. As Adam's counsellor Louise, Stephanie Osztreicher finds the requisite heart and soul of her character, but like Kuchmar's Wanda, suffers from too much standing and/or sitting around in front of Naomi Wong's beautifully (and insightfully) designed set, perfectly shown-off by Patrick Gooden's engaging lighting design.
While The Role Model trips over itself into a clumsy climax, with a disturbingly glib and almost cavalier attitude toward the horrors of youth suicide, Hoogendoorn is quite obviously an emerging Australian playwright of considerable vision and originality. I look forward, with keen anticipation, to his continued development and, hopefully, increased faith in his abilities and a more rigorous directorial interrogation of his work.
Geoffrey Williams