Room on the Broom – Live on Stage 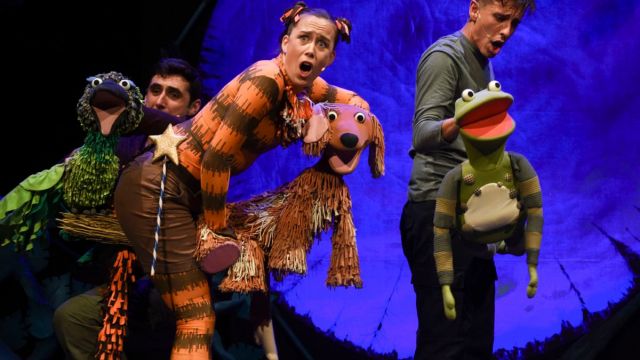 Room on the Broom has flown into Melbourne for the summer holidays. Julia Donaldson and Axel Scheffler’s award winning children’s picture book has been reimagined for the stage. Four theatrical performers and a talented team of stage creatives combine physical theatre, music and clever puppetry to bring this marvelous tale to life.

A witch and her cat ride high across the sky on her broom until a stormy wind blows her hat, bow and wand away. Some helpful animals get involved to retrieve them and claim space on her broom, but when it cracks in half, all hell breaks loose. A hungry red dragon appears and wants to eat the witch - her animals fight him off and eventually they all live happily ever after on the witch’s new broom, that now has plenty of room for everyone.

Young families, grandparents with children between the ages of 3-8 will be enchanted. The cast of four is delightfully quirky - the witch (Cally Castell) is cute, crabby and playful and her cat (Katie Burson) is cheeky, selfish and quite tricky. There is plenty of funky song and dance, with lots of audience participation encouraged – there’s a ‘whoosh’ from the crowd as the witch and her cat fly high across the sky.

The dexterous puppeteers are very skillful and crafty, moving around the stage with elaborate hand and string puppets designed by Yvonne Stone. There is a sweet fluidity and clever manipulation of theatrics that sees Ryan Dulieu handle both Dog/Frog, while Edwin Beats is Bird and the big bad Red Dragon.

Stories from our childhood stay with us for life and this one will no doubt be firmly entrenched for years to come.