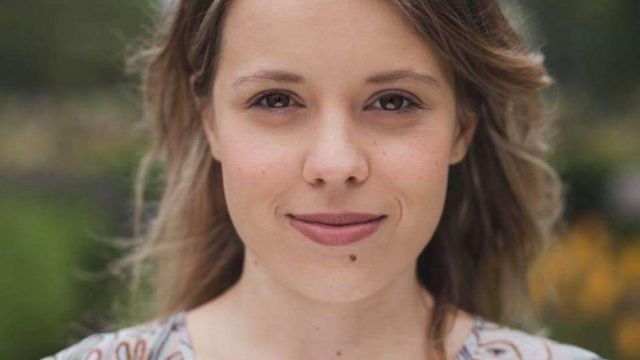 Two different, separate couples go for a clandestine (‘dirty’) weekend at Scarborough – a beach resort sort of place.  I guess Fiona Evans called her play ‘Scarborough’, because a beach resort evokes the idea of the temporary escape – either from ‘real life’ or even reality itself.  But when we join the couples, the ‘dirty’ part of a dirty weekend seems over, run up against anxiety about being sprung by their B&B landlady, anxiety about even leaving their room because they might be seen, and anxiety about where they should be, or could be, rather than where they are.  Their conversations are banal – with an underlying tension.

The set design of a dinky, bland B&B room by Lauren Nash provides a visual and increasingly oppressive contrast to the emotions of the couples.  The Burrow stage is, in any case, tiny, but here a sense of claustrophobia and – ironically, the need to escape - is powerful.

Couple one is Laura (Jane Barry) and Daz (Bradley Trudgett). Couple two is Aiden (Timothy Smith) and Beth (Isabelle Ford).  When they arrived in Scarborough on the Friday night, no doubt they had one thing in mind, but now… now they’ve ‘done it’, the bloom is off the rose, at least for the older lover in each couple. Why the anxiety?  As we soon learn, Laura is in fact sixteen-year-old Daz’s PE teacher… and Aiden is sixteen-year-old Beth’s PE teacher.  The sixteen-year-olds, still in the heady throes of the thrill of it all and no longer virgins, of course think they’re loved and in love.  They declare their love, they have ideas about a future, only to get evasion in return.  A chill descends.  Their teachers, having fulfilled what perhaps was a fantasy, are now withdrawing.

I don’t think it is too much of a spoiler to say that the play runs each of the couples consecutively – Laura and Daz, and then Beth and Aiden.  What interests the playwright is how we respond, how we perceive, understand and, perhaps judge, these two superficially identical situations – identical except that the sexes are reversed.  An ‘older woman’ – we learn Laura is nearly thirty – and a schoolboy, her pupil?  An older man, Aiden, and a sixteen-year-old nymphet, his pupil?

The cast convey these aspects of the situation credibly and Daz and Beth draw our sympathy.  They’ve been had and now they’re realising they have been.  Mr Trudgett’s Daz is all sad hormonal boy while Ms Ford’s Beth is bright, cheeky and teen cliché sexy.  Ms Ford is, however, inhibited by her costume: the short skirt is too short, and she gets distracted tugging it down.  Why are any of them dressed anyway? What has drawn the couples to Scarborough is, let’s face it, sex – but their ardour seems to’ve cooled very rapidly.  There’s not much chemistry between the couples, no suggestion on stage of the desire they must have had building for months – not even the residue of what they did on Friday night and Saturday morning.  No ambivalence, no struggle between lust and fear, or lust and dismay.  Ms Ford’s skirt and her tugging it down to cover her knickers points to what is, perhaps, a problem in the performances here – or in Bronwen Coleman’s otherwise sharp direction – or it’s a problem inherent in a text that starts to look schematic.  A reluctance to convey sensuality, in writing or performance, especially as a motive, seems to be an Australian problem in theatre and film.

If the text has a problem overall, it is that once we grasp the playwright’s intention and each of us responds in our own way to, first, Laura and Daz, and then Beth and Aiden, and as we realise that each couple has almost exactly the same dialogue in the mouths of different characters, there are no more surprises, and it’s the same reveals again.

For me, possibly for most of us, there is more sympathy for Beth, more judgement of Aiden.  Mr Smith exacerbates this by adding a frost to Aiden’s withdrawal, whereas Ms Barry’s Laura is softer, more guilty and sympathetic to the rather oafish, bewildered Daz.  But we know that Daz will get over this, he’ll probably boast about it, but Beth will feel horribly vulnerable, foolish and used.  That she will is ‘unfair’, it’s the ‘double standard’, but the playwright seems to suggest that that, sadly, is just how society works.