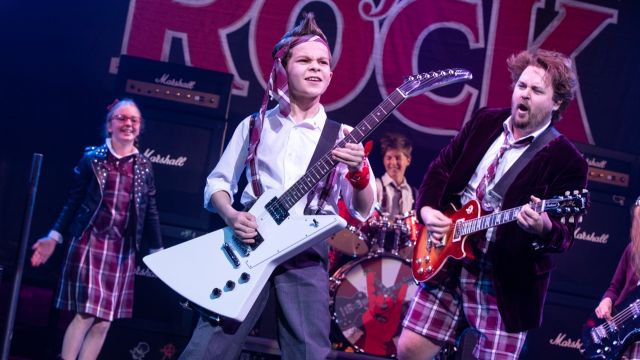 In many ways School of Rock is The Sound of Music for a new generation and with a gender swap: a naïve young adult tutors a group of repressed unhappy kids. Through music, the kids are empowered and find joy. At the same time, the equally repressed unhappy authority figure is also reconnected to music and falls in love with the tutor. Together, they all defy an oppressive regime, but this time it’s not Nazis but their rigid school and “the Man”.

The naïve young adult is the not-young-but-immature Dewey Finn (Brent Hill). He lives by mooching off his best friend, and still clinging to his juvenile dream of being a ROCK STAR!!!  He is a ratbag with few redeeming qualities.

Finn cons his way into teaching at a posh private school, ruled with an authoritarian air by the principal Rosalie Mullins (Amy Lehpamer). His charges are a class of unhappy tweens who are neglected by their parents – either by being ignored or being helicoptered. 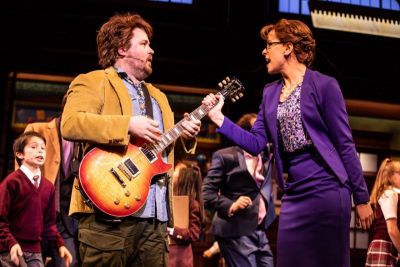 The kids all play classical music, but Finn makes them ditch that for rock’n’roll. His motive is selfish; he wants to win a band competition and needs a backing band, while he plays the front man. Finn also helps the principal reconnect with her love of rock music, and romance follows. He gets exposed as a fraud, but redeems himself by show’s end. Meanwhile the staff and parents realise the error of their too-strict ways.

The production is inspiring, uplifting, and a lot of wild fun.

Andrew Lloyd Webber returns to his rock roots, and his score kicks major butt. It is also the first time Lloyd Webber “shares” the composing, as music by Mozart and Stevie Nicks pops up, and famous guitar riffs are quoted in You’re In the Band. The two songs specifically written for the film (Finn’s improvised a’capella in the classroom and the song the kids perform in the band comp) also feature. The cast rocking-out in the finale to a metal version of Mozart’s Queen of the NightAria is a telling statement.

The staging and panelled sets are simple, but made effective in the way the panels are moved around, and the simplicity allows the cast to shine. The choreography is also simple but effective, with the younger cast defaulting to a repeated stomping jump. Though repetitive, such a step seemed to allow them to maintain the control in their singing while expressing their defiance. 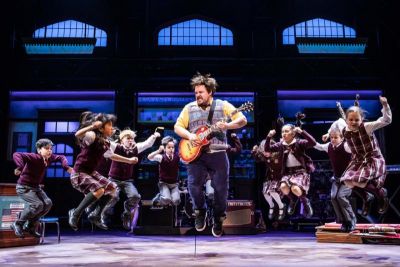 Brent Hill is a powerhouse, with enough wattage to power a city. I want to have whatever he’s on, though at times he did race his lines. How he manages to pump out the energy while being costumed in bulky clothing under stage lights is a miracle. I found Hill’s Finn much more believable and likable than Jack Black’s version from the film. Finn’s epiphany and redemption in the film never seemed real to me– it felt like Finn was still conning the marks and only pretending to repent. Here, I totally believed the turnaround, and by show’s end I grew to like Finn.

Amy Lehpamer is just beautiful as Principal Mullins, both vocally and in acting. I suggest someone give her a new hairstyle please. This may seem trivial, but the ’do didn’t complement her features and I found it distracting. Yes, I know the short tight style is meant to suggest rigidity and authority, but I couldn’t believe her character would fall for someone like Finn, all because of the hair (as silly as that sounds). She brought a country+western twang when singing her big solo, “Where Did the Rock Go?”, where I thought it could have been more effecive if sung with less c+w and a more pop /folk feel. The song is in the style of Americana folk-pop, and I felt the country was overdone. 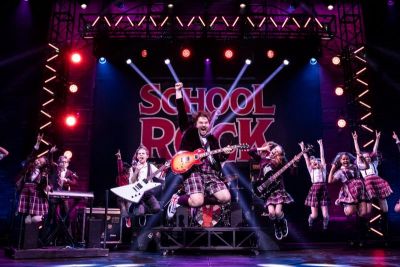 Apparently there are kids in the show but I didn’t see any; I was too busy being dazzled by the brilliant performers dressed in school uniforms. They may be children but they had the talent and delivery of grown professionals and rock gods. Before the show starts, a pre-recorded message by God himself (Andrew Lloyd Webber) assures us the kids are definitely playing those instruments. A quick flick of their bios reveals most of them have been practising since they could walk. Dazzling talent aside, what also made these children so appealing was that none of them seemed like bratty stage terrors – they came across as genuine and likable. There seemed to be an innate joy and love of music when they played and sang. Here’s hoping they keep their heads level, should they pursue a career in music.

And a major shout out to the remaining adult cast playing the teachers, parents, and friends. They did a spectacular job holding their own against the children.

Parents of young ones: the show is just under 3 hours long (Act 1 is 90 minutes), including a 20 minute interval. Some of the kids in the audience became restless when the show defaulted to just the adults. There’s no sex, drugs, swearing, or violence. However, in the song where Finn urges his students to rebel the word “pissed” is dropped (in the non-offensive US context), as is the word “shit”. None of that seemed to be noticed by the kids in the audience.