The Servant of Two Masters 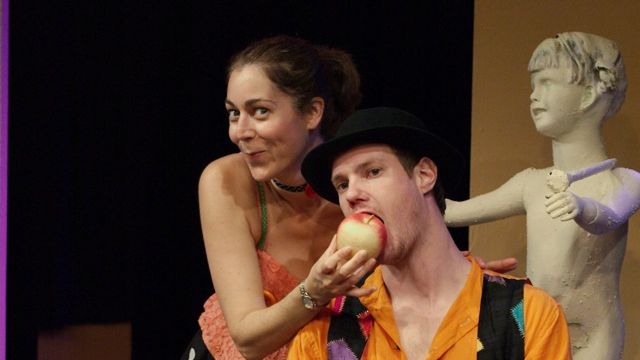 Goldoni’s classic Italian farce of multiple mistaken identities saves most of its frenetic fun until after interval. It’s a play with a lot of exposition and set-up before the pay-off, including the introduction and establishment of the stylized stock commedia dell’arte characters (minus masks) and performance conventions, largely unfamiliar to local community theatre audiences and performers. Even so, the pace of act one seemed a little too slow at times on opening night.

The mood is well set in Carla Moore’s production for Theatre on Chester, with lively house-warming music hinting at the chases ahead. A simple set – mostly arches and windows – is ideal for sudden appearances and disappearances galore.

There’s a nod to commedia masks in a brief mime opening, but it is Joy Sweeney’s distinctive, vivid costumes which visually establish the character types – be it mufti for Truffaldino, a confection of hearts for Clarice or form-hugging leathers for Hayley Watkins’ Beatrice.

It is immediately apparent that several cast members are utterly at home with the unique demands of broad pantomime. Warren Blood instantly nails Dottore’s broad, pompous comedy; Melanie Robinson’s Brighella is earthy and knowing at first acquaintance; Emily Sowden’s Clarice is a classic pantomime lover and Julie Moore’s maid Smeraldina delivers broadly signaled coquettish vivaceousness. When Alan Chambers enters as the play’s titular servant, it’s instantly clear that he is the type of natural clown essential to deliver this charming, roguish opportunist. On her appearance as the girl-masquerading-as-guy, Hayley Watkins delivers just the right swaggering persona. For some performers, though, the bravery, confidence or lack of self-consciousness necessary to comfortably assume the essential larger than life stylization was a gradual thing on opening night, though it became pretty infectious during the more frenzied second act.

When I heard that opening night was just the second time that the entire company of this highly stylized, broadly farcical ensemble piece had been together, I knew why the production hadn’t uniformly found its pace and timing yet.

Happily all the elements are there and the break-neck second act suggests that this talented cast can hit their straps and make a real romp of The Servant of Two Masters as the season progresses. Once the cast have the chance to work off each other and establish their chemistry, Lazzi (extended commedia gags) may also come into their own.

Some non-naturalistic conventions, particularly performers mistakenly whispering asides when it’s implicit that no-one on stage can hear what is being said, warrant reconsideration.

I look forward to hearing on the grapevine that this promising production has found its full potential.