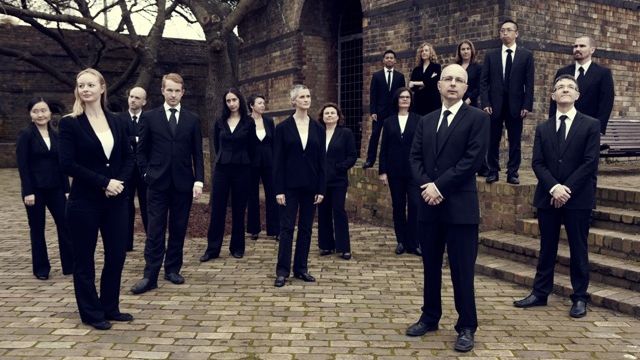 The Great Hall at Sydney University provided both a beautiful setting and perfect acoustics for this special Easter presentation from the Sydney Chamber Choir.

Preceded by a clear explanation of the pieces to be presented, and supported by detailed program notes, the choir, conducted by musical director, Paul Stanhope,  began with early compositions on the theme by Frederick Arthur Gore Ouseley, Is It Nothing to You? (1859), Tomas Luis de Victoria, Caligaverunt oculi mei (1585), Orlando di Lasso, Vide homo from Tears of St Peter, and Carlo Gesualdo di Venosa (1594).

These were followed by James McMillan’s Tenebrae factae sunt (2006) and the world premiere of two movements from Nigel Westlake’s Missa Solis – Requiem for Eli (2012), a piece not connected with the story of the crucifixion, but one which reflects deep grief and loss. It must have been a thrill for Westlake himself to hear this premiere performance of his very special work in such a beautiful old building by such beautiful voices.

The choir was then joined by one of Musica Viva’s 2012 ‘Rising Star’ ensembles, the Sydney Camerata, led by Mathisha Panagagoda in a very moving performance of Heinrich Schutz’ The Seven Words of Jesus Christ on the Cross (1645). Soloists from the Choir, were joined by tenor Pascal Herington and baritone Alexander Knight, who sang the part of Christ with very sustained emotion.

The final performance, Seven Last Words from the Cross, written by James McMillan in 1993, exposes the final sentences in more emotionally charged music that makes the ordeal and suffering of the crucifixion even more dramatic.

Hours of rehearsal go into these ‘one off’ performances. Though the audience was relatively large, what a pity it is that more do not get to hear it! However it was recorded, and CDs of other works of the Choir are available. Check their website – www.sydneychamberchoir.org.