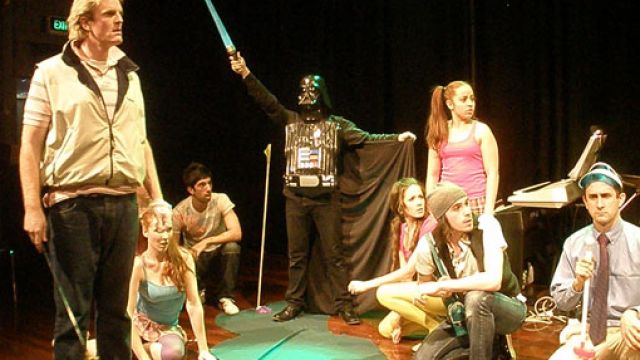 It begins with a brief musical revolving around the intrigues of championship miniature golf – Chess meets Putt Putt - if you like - and ends with the chirpy Imelda – The Musical (Marcos), derivative of Evita, Chicago and Barnum. In between there’s a spectrum of very good, ordinary, and … new musical theatre writing.
Short + Sweet + Song, nine (supposedly) 10 minute maximum bites of musical theatre, though a mixed bag, is worth a visit.
The best pieces are engaging, and the worst are, thankfully, short.
Some of the production values are excellent, though some pieces feel underdone.
Along the lines of the Short + Sweet play festival, Short + Sweet + Song is a play-off - short musical theatre works are voted on, mostly by a musictheatre industry panel, but with a separate audience choice as well.
The constant of the night was the enthusiasm and energy of the local performers - inconstant, the talent and inventiveness of local and international writers. I would have liked an indication of which works were actually local.
My favourites – in no particular order:
• The aforementioned mini-golf fluff, with easily the liveliest, most tightly conceived ensemble work of the night.
• A solo performance about body-image, bravely performed.
• An ensemble piece where a young woman rejects her perfect life and the guardian stalker who has fabricated it.
• A semi-operatic interpretation of the relationship between a carer-mother and her disabled son.
A musical in ten minutes – what a challenge - long enough for two conventional showtunes, maybe. Long enough for any real development? The best works of the night were self-contained and engaging, and reached a satisfying conclusion – the less impressive, short enough, yet too long at ten minutes.
If the rules of the competition are rigidly applied, at least one of the best works will be disqualified. Pity!
Get along musical theatre fans - an enjoyable mixed bag!
Neil Litchfield