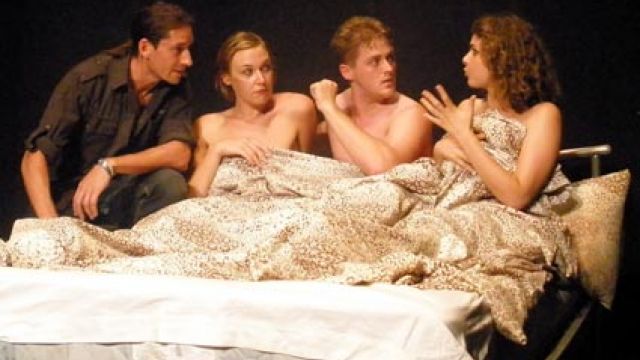 Gladiatorial 10-minute theatre is back for another year, and if the first week’s offerings are anything to go by, it’s a case of the good, the bad, and the tacky, tasteless and badly written.

Each week at Newtown, and, from February, at NIDA, different programs of ten 10-minute plays will be presented. Each week’s winner, selected on judges’ vote, and a single audience choice over the entire season, move forward to the final.

Performance, writing and direction standards vary wildly from play to play, and from week to week, in this testing ground for new writing.

My choice in this first program is backstage comedy All Hail by ACT writer Dale Menz. As the understudy prepares to go on in a relatively minor role in ‘the Scottish play,’ his wife, a la Lady Macbeth, urges him to kill the star and take over the lead. Michelle Anderson’s scheming performance is one of the night’s best, in a clever, entertaining piece of writing. Another entertaining backstage piece, Putting Your Best Foot Forward, sees a bitchy stage queen advising and patronizing a stage novice at the make-up mirror prior to their big entrance.

Best drama for mine is probably The Pink Dress, about a 9/11 witness’s struggle to come to grips with his ground zero experience, while A Match Made in Heaven promises more than it ultimately delivers, as a soldier and a suicide bomber meet on the other side.

Short bedroom farce Embedded gets the second half off to a lively, entertaining start.

Sadly the evening ends on an utterly cringe-worthy note with The Regal History of Our Willy, an un-clever barrage of smutty sexual references and crude puns, way too long at ten minutes.